Didier Drogba scored two goals in the first 20 minutes to help Chelsea beat Rosenborg 4-0 and clinch a berth in the second round of the Uefa Champions League.

The win gave Chelsea 11 points in Group B with one game left. Rosenborg has seven, also from five games.

Chelsea, which only managed a 1-1 draw at home against the Norwegian team, totally outclassed Rosenborg in the opening half.

The Ivory Coast striker, playing his first match since recovering from a knee injury, struck again in the 20th when he lobbed a loose ball over Hirschfeld.

Defender Alex made it 3-0 in the 39th minute with a sizzling free kick, shooting low through heavy traffic in the penalty area, although he was also the benefactor of some comical defending.

Cole scored the Blues’ last goal in the 73rd minute, putting in a rebound past Hirschfeld.

Rosenborg, which finished a disappointing fifth in the Norwegian first division last month, still has a chance to make the second round with one game to go.

In the other Group B match, Valencia drew 0-0 with Schalke, ending the Spanish team’s chances of a place in the second round.

Valencia, the 2000 and 2001 finalist, had captain David Albelda sent off in the 32nd minute of the match at Mestalla stadium.

Schalke will reach the last 16 if it wins its final game against visiting Rosenborg on December 11.

The German team is in third place with five points, one more than Valencia.

Group winner Chelsea has 11 points, and Rosenborg has seven.

At Anfield, Fernando Torres scored his first Champions League goals in Liverpool’s 4-1 win over FC Porto, putting the five-time champions back on course for a spot in the second round.

The Spain striker scored two goals, while Steven Gerrard and Peter Crouch added the others.

Torres rose above Porto captain Lucho Gonzalez to head home Gerrard’s cross in the 20th minute, but Lisandro Lopez equalized against the run of play in the 33rd.

Przemystaw Kazmierczak outmuscled Javier Mascherano on the left flank and whipped in a cross to Lopez, who evaded Arbeloa and beat Pepe Reina with a diving header.

With Liverpool’s European hopes fading away, Torres produced the winning goal in the 78th.

Gerrard then scored a penalty in the 83rd and the captain delivered a corner for substitute Peter Crouch to nod in a fourth in the 87th.

With George Gillett Jr. and Tom Hicks watching across the Atlantic, Liverpool coach Rafa Benitez seemed to be vindicated in his feud over funding for transfers in January as Torres, the summer’s star signing, justified his club-record fee of $40.6 million.

Torres was a potent force throughout the night.

In the 10th, he won possession on the halfway line, surged forward unchallenged and leashed a shot from the edge of the penalty area which was collected by Helton.

Within a minute of Porto’s sudden goal, Torres was only thwarted by Bruno Alves in producing a shot.

But the sting was taken out of Reds’ storming start and Lopez came close to scoring a second in the 36th when he was one-on-one with Reina, but shot wide.

Porto still leads Group A with eight points, followed by Marseille and Liverpool with seven each and Besiktas with six.

The Turkish side kept their chances alive after Brazilian striker Bobo scored in the 88th minute to give Besiktas a 2-1 win over Marseille.

Rodrigo Tello scored the first goal for Besiktas in the 26th, while Taye Taiwo had equalised in the 65th.

The Istanbul side has now six points but remains in fourth place with one match to go in Group A. Porto leads the group with eight points, while Liverpool and Marseille both have seven.

Tello tested Porto goalkeeper Mandanda two minutes into the game, but his effort went over the bar.

Ricardinho’s low shot from the corner of the box in the 24th went wide, before Tello put the hosts ahead with a free kick from 22 metres.

Besiktas almost doubled the lead in the 41st, when captain Ibrahim Uzulmez capped a powerful drive into the area with a cross to Serdar Kurtulus, but his high shot was collected by Mandanda.

Marseille tried to answer in the second half, but Djibril Cisse’s header off a free kick in the 50th was easily grabbed by Besiktas goalkeeper Rustu Recber.

Marseille’s midfield constantly pressured Besiktas and won the ball in the 58th minute, letting Mamadou Niang take the ball into the area, but his shot missed the target.

Taiwo’s equaliser came on a powerful high shot from 25 metres after the Besiktas defence parried a corner kick.

Bobo’s winner then came after a through ball from playmaker Delgado. 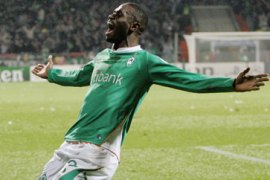 The Germans keep their campaign alive, while Celtic snatch all three points.