Opener Wasim Jaffer and Saurav Ganguly led the charge for India as they closed to within 32 runs of victory over Pakistan at the end of the fourth day in the first test.

The home team, set a winning target of 203, were coasting at 171 for three in their second innings when play was called off five minutes before the close due to bad light.

Earlier, Pakistan were 247 all out in their second innings, adding just 35 runs to their overnight total of 212 for five.

Former captain Ganguly was 48 not out after dominating a 78-run unbroken fourth wicket partnership with Sachin Tendulkar (32 not out) after strike bowler Shoaib Akhtar claimed the top three batsmen to raise Pakistan’s hopes.

Jaffer struck a fluent 53 and put on 82 runs with Rahul Dravid (34) to ease the pressure after fellow opener Dinesh Karthik (1) fell in Akhtar’s first over.

Akhtar also removed Jaffer and Dravid to reduce India to 93 for three but the rest of the attack could not really press home the advantage on a Ferozshah Kotla pitch offering little help.

Pakistan slumped quickly in the morning session, losing their last three wickets for four runs in the space of four deliveries.

Tendulkar holds the record for most test hundreds with 37. 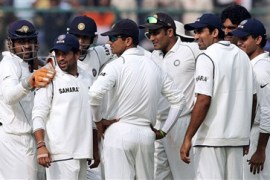 India on top in first Test

Pakistan are 210 for 8 at stumps on day one of the first Test in New Delhi.