The Australian paceman removed Marvan Atapattu (80) and skipper Mahela Jayawardene (0) on the fifth and sixth balls of his 14th over as Sri Lanka slipped from 158-1 to 158-3.

But Kumar Sangakkara, who missed the heavy loss last week because a hamstring strain, avoided Lee’s carnage and compiled his first test hundred against Australia to keep Sri Lanka’s chances alive in the second test.

At stumps on the penultimate day, he was unbeaten on 109 and Sri Lanka was 247 for three, still needing 260 to win.

Although it will require a world record for Sri Lanka to level the series, the West Indies’ 418 against Australia in 2003 is the highest winning total ever achieved by a team batting fourth.

“You’ve got to be realistic that 507 is a massive ask, but the direction in which we go to tomorrow is now basically up to us,” Sangakkara said.

“If we can get through to lunch without losing a wicket then things get a lot clearer.

“I don’t want to be a soothsayer and say what will happen. But we always go into the middle with a lot of belief.”

Sangakkara scored 287 in the world record 624-run partnership with Jayawardene that helped Sri Lanka beat South Africa at Colombo in July last year, so he knows what it will take.

Although Australia captain Ricky Ponting is confident his lineup will take early wickets and wrap up its 14th consecutive test win.

The pitch “will be a little bit more up and down tomorrow, particularly with the harder, newer ball, so we’re still right in the box seat,” he said.

“If we break this partnership, as we all know Sri Lanka has got a long tail, so if we can get a couple of early breakthroughs tomorrow we’ll be right back in front.”

Sangakkara said the duel between bat and ball leading up to Atapattu’s dismissal was the toughest of the series.

After a patient knock, Atapattu could not resist a hook and was caught in the deep by Phil Jacques.

That ended a 143-run second-wicket stand with Sangakkara and could be the 37-year-old opener’s last test innings after an outburst last week when he described national selectors as “Muppetts.”

Lee’s next ball, an inswinging yorker, clean bowled Jayawardene, who scored a defiant 104 in Sri Lanka’s first innings of 246 but did not offer a shot to the first ball he faced on Monday.

“I think (Jayawardene) had everything covered except the reverse swing,” Sangakkara said.

“Unfortunately for us I believe that if he had got through it, the way Mahela’s been batting through the series, that would have been a massive plus to have at the end.”

Sanath Jayasuriya didn’t offer a shot to the hat-trick ball on the first delivery of Lee’s next over, but that one just missed his off stump.

He survived to be 33 at stumps in a valuable, run-a-minute 89-run stand with Sangakkara.

Jayasuriya had one reprieve, on 11, when he skied a no-ball from Stuart MacGill to Michael Clarke.

The fourth-wicket pair feasted on MacGill’s loose spell, which cost the Australian legspinner 93 runs in 16 overs on a docile pitch.

The Australians resumed at 111 for one and declared at 210 for two just before lunch, with Ponting unbeaten on 53 and Mike Hussey on 34.

Lee, man-of-the-match in Australia’s innings and 40-run win in the first test, troubled Atapattu in the first over and Mitchell Johnson dismissed Michael Vandort (4) in the fourth.

After bowling Sri Lanka out for 246 on Sunday to gain a 296-run first innings buffer, Ponting had decided to bat again rather than enforce the follow-on.

Australia added 99 runs in 26 overs on the fourth morning for the loss of Phil Jacques (68), with Hussey hoisting Muttiah Muralitharan for six to lift Australia to 204-2, a lead of exactly 500.

The declaration came after the following over.

Matthew Hayden was out lbw for 33 to Muralitharan late Sunday.

Muralitharan, who had high expectations of surpassing Warne’s mark in Australia, finished the series with four wickets and will have to wait until Sri Lanka’s series against England next month to pursue the record again. 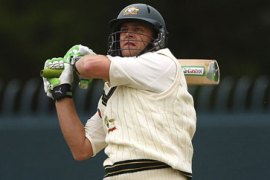 Adam Gilchrist hits his 100th sixth in test cricket as Australia put on a big score.