Of the four Masters Cup semi-finalists, two will be Spanish after the sixth-ranked David Ferrer overwhelmed No. 8 Richard Gasquet 6-1, 6-1 to win the Gold Group and clinch his own berth in the semifinals.

The result meant Gasquet was eliminated from the season-ending tournament and allowed Rafal Nadal, who earlier beat No. 3 Novak Djokovic 6-4, 6-4, to advance, too.

“We are happy for that because he’s Spanish,” Ferrer said.

As one of the players in best form along with Andy Roddick, who has clinched the Red Group and faces top-ranked Roger Federer, Ferrer said he didn’t seriously think he had a chance to advance.

“For me it’s important to play the semifinal,” said Ferrer, who also reached the U.S. Open semifinals and is already guaranteed of earning his biggest paycheck ever.

Nadal was pretty happy, too, after playing his best match so far.

He had Djokovic, who has admitted to exhaustion from more than 100 matches this year and off-court demands on his time, in almost constant trouble.

“I am very happy about my game today,” Nadal said.

Djokovic showed flashes of the skills that carried him from No. 16 in the rankings in January to five titles and No. 3 in the world.

But, the Serbs errors proved too much to bear.

He gave a bitter smile when he netted a forehand as Nadal served at 5-4 in the first set, then trudged to his chair when he sent a backhand long on set point.

Nadal got an early break in the second set and was increasingly demonstrative as the match wore on.

The Spaniard, serving at 4-3, pumped his fist eight times after fending off the second of Djokovic’s two break points with a great backhand volley for a player not known for his net game.

Nadal smacked a forehand winner down the line on match point.

“It wasn’t my week,” Djokovic said.

“I wasn’t performing the way I wanted to. Unfortunately I have to finish with the three losses, which is a bit disappointing. But, of course, I don’t want to think negative. It’s been an amazing year.

“Rest is something which is necessary for me and the most important thing in this moment. I’m going to go somewhere far, far away from everybody,” Djokovic added with a smile.

Ferrer needed only 59 minutes to beat Gasquet, who never got going after looking sharp while beating Djokovic in his previous match.

Ferrer won his group by taking all three of his matches while dropping only one set, to Nadal.

Gasquet broke him in the first game, but Ferrer then ran off eight games in a row.

Gasquet did not hold serve until he already was down 2-0 in the second set.

Constantly on the run from Ferrer’s deep groundstrokes, he managed to win just 12 of 39 points on his serve and had five winners to 25 unforced errors.

“I think everything in his game was horrible for me today,” Gasquet said.

“I start horrible. That was the key of the match for me. But he has the game. He played incredible. After I lost 6-1, I lost my confidence. It was impossible for me to come back.”

Ferrer won 54 points to 25 for the Frenchman, who sent a forehand long on match point to hand Ferrer his sixth service break.

No. 4 Nikolay Davydenko faces No. 7 Fernando Gonzalez in the other Red Group match Friday.

Advancing to the men’s doubles semifinals were second-seeded Paul Hanley of Australia and Kevin Ullyet of Zimbabwe, along with Martin Damm of the Czech Republic and Leander Paes of India.

Hanley and Ullyet beat Damm and Paes, who already had advanced, 6-3, 6-4 to win the Gold Group. 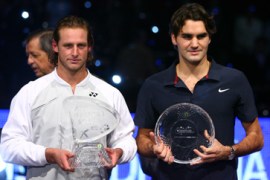 Argentinian comes from a set down to beat world number one and claim Madrid masters.