Newcomers Franck Ribery and Luca Toni were on target to help Bayern Munich to an emphatic 4-0 win at Werder Bremen in the Bundesliga.

Bayern took the lead in the 31st minute when French international Ribery chipped in a penalty following a foul on Toni.

The Italian striker added the second six minutes into the second half, Hamit Altintop swept in the third and Andreas Ottl struck from long range to wrap up another comprehensive victory and make it six points from two games for Bayern.

Schalke 04 got their first win of the season with a 4-1 triumph at home to Borussia Dortmund in the Ruhr Valley derby.

Champions VfB Stuttgart, who drew with Schalke last weekend, are still waiting for their first victory after going down 3-1 at Hertha Berlin.

Bayern lead the table as the only team with maximum points, although Hamburg SV could join them if they win at home to Bayer Leverkusen on Sunday.

Schalke are second with four points, while Werder and Stuttgart have one point each.

Ribery and Toni were part of a 70 million euros ($94.14 million) rebuilding programme at Bayern after they finished only fourth last season.

After a 3-0 win at home to Hansa Rostock on the opening weekend, the trip to face Werder was their first serious test.

The opening goal came when Ribery sent Toni into space on the left of the area. Petri Pasanen managed to get back but the Finn mistimed a tackle and referee Markus Merk awarded the penalty.

Ribery trotted up and lifted the ball into the top of the net, down the middle and over the diving keeper, for his first league goal since his move from Marseille in a deal worth up to 30 million euros.

Bayern kept control easily and made the game safe when Altintop crossed for Toni, who took one touch to control the ball and then swept a shot back across keeper Tim Wiese.

Ribery showed great skill in midfield to start the move for the third, which finished with Altintop’s shot from the edge of the area.

Ottl rounded off a memorable win with a shot from outside the box that beat Wiese high to his left.

Schalke’s failure to win the title last season was down to a defeat at Dortmund on the penultimate day.

On Saturday they gained a modest amount of revenge with goals from Marcelo Bordon, Christian Pander, Gerald Asamoah and Kevin Kuranyi.

Stuttgart were on course for a first win of their title defence when Thomas Hitzlsperger struck from outside the area after 15 minutes, only for Hertha to hit back with a Sofian Chahed penalty and goals from Malik Fathi and Solomon Okoronkwo. 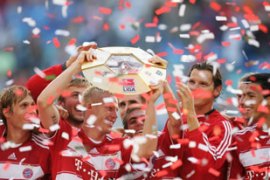 Bayern looking to bounce back

The big spenders Germans are looking to scoop the pool.