Everton came crashing back down to earth on Saturday with a 1-0 defeat at Reading while Tottenham Hotspur belatedly hit form with a 4-0 demolition of newly promoted Derby County.

Stephen Hunt scored Reading’s winner just before halftime and a flat Everton, who had won their opening two matches, failed to find a way back as they were knocked off the top of the table on goals scored by Wigan Athletic.

Wigan gave Roy Keane’s Sunderland a wake-up call with a 3-0 victory at the JJB Stadium. Emile Heskey’s first-half volley and penalties after the break from Danny Landzaat and Antoine Sibierski inflicted a first defeat on Sunderland.

“We were second best, I can’t think of any plusses,” former Manchester United captain Keane told the Sunderland Web site.

Tottenham got back on track after a poor start to the season with two goals from Frenchman Steed Malbranque and one from Jermaine Jenas killing off a poor Derby side inside the opening 15 minutes at White Hart Lane.

Darren Bent, a £16.5 million pounds ($32.61 million) capture from Charlton Athletic, scored his first competitive goal for Tottenham in the second half.

“We are not bottom now which is a relief,” said Tottenham manager Martin Jol, who some newspapers had suggested was in danger of losing his job after two defeats.

Two sides looking for their first points of the season, West Ham and Middlesbrough, both got off the mark.

Big-spending West Ham won at Birmingham City thanks to a Mark Noble penalty while Egyptian striker Mido scored on his debut as Boro came from behind to beat Fulham 2-1.

The match at Craven Cottage ended controversially, however, as Fulham appeared to have a late equaliser harshly ruled out when the ball was adjudged not to have crossed the line.

“You’ve got to be brave and make the decision, it was well over [the line],” Fulham manager Lawrie Sanchez said.

Sammy Lee is still waiting for his first points as Bolton Wanderers manager after his side were beaten 3-1 by a Portsmouth side inspired by Nwankwo Kanu to leave them bottom.

Nicolas Anelka gave Bolton an early lead but Kanu quickly equalised and then sent John Utaka clear to race half the length of the pitch and make it 2-1 before halftime.

England’s leading striker Michael Owen made his first appearance of the season for Newcastle United after recovering from a thigh injury, coming on as a second-half substitute in a dour 0-0 draw with Aston Villa. 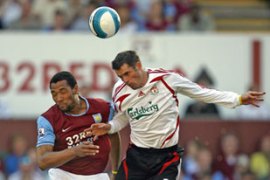 Reds send an early warning to their Premiership title rivals. 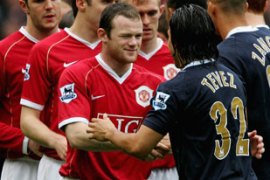 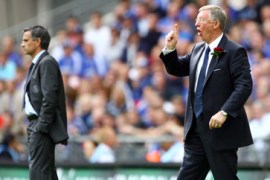 Manchester United and Chelsea open up a new season with Community Shield clash.