Asian Cup champions Iraq have flown out of Dubai, UAE, to Amman, Jordan, after being hosted at a special party to honour their achievements in “a show of Arab unity”.

The Iraqi team, who beat Saudi Arabia in the final, were awarded a cash prize of $5.45 million by Sheikh Mohammed bin Rashid al-Maktoum, UAE vice-president and prime minister.

In front of more than 5,000 people at the celebrations, Hussein Saeed, chairman of Iraqi Football Federation, said: “It’s a big honour to celebrate the team’s victory in the UAE.”

Younis Mahmoud, Iraq’s captain, said: “Despite the suffering of our people and the poor preparations, we fought hard in all matches. What kept us going was our resolve to bring joy to our people.”

“This could well be the start of a trend with world leaders beginning to think more about restoring peace in Iraq.

“Believe it or not, we had this feeling that even the Saudis were praying for us to win the final.

“The Saudis are one of the best sides on the continent and they are not easy to beaten, but we were determined to win for our people.

“Our victory has sent a message to the whole world to come together and end the pains of Iraqi people.

“I don’t know who is Shia, Sunni or Kurdish in our team. All we know is that we are Iraqis. We were born so and we will remain so.”

The Iraq win prompted a joke from Prince Saud al-Faisal, Saudi foreign minister, after his talks on Tuesday with Condoleezza Rice, the visiting US Secretary of State, who sought the Kingdoms’s support for US efforts for Iraq stability.

“As an indication of our good intentions, we let their team win,” al-Faisal told a press conference.

Iraqi player, Haider Abdul Raziq, said: “We will go back to Baghdad and no one will stop us from conveying our message to the leaders of different political parties and sectors and the time has come to stop killing each other.”

The party got off a tense start when organisers played the Iraqi anthem of the Saddam Hussien era, rather than the country’s new one.

Reportedly, some players and officials walked out of the event in protest to which Emirates officials later apologised.

Saad Jassem al-Hayani, Iraqi Ambassador to Jordan, was on hand to welcome the victorious team to his country, along with Iraq football federation chief, Hussein Said, and the head of the Iraq Olympic committee, Bashar Mustafa.

Unable to travel to Iraq at the moment Said said the Iraq team is due to fly to Baghdad on Friday.

Iraq’s Brazilian coach Jorvan Vieira, who is leaving the team as his contract ends, said that “in these two months, I have learned that the Iraqis are special people with special powers.” 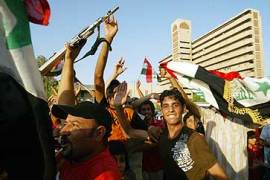 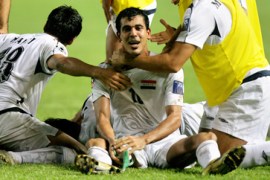 Field of dreams for Younis

The Iraq captain is named Golden Boot winner and Player of the Tournament.