Away wins for holders Al Ahli and rookies Al Hilal of Sudan in their group games this weekend will secure their places in the African Champions League semi-finals.

The Egyptian club take on Esperance of Tunisia at Rades on Saturday, with Al Hilal are away to Ivory Coast champions ASEC Abidjan the following day.

Al Ahli will look to keep up their 100 per cent record in Group B against a struggling Esperance, who have just a solitary point from their first three games of the league campaign.

“It was a real delight to watch my players perform brilliantly individually and as a team,” he said after the 2-1 win over the Portuguese giant.

Al Ahli’s easy 3-0 win over Esperance in Cairo last month was followed by surprisingly critical complaints from Jose, who felt his players did not take the match seriously enough.

Saturday’s return at the November 7 stadium on the outskirts of Tunis is likely to be much tougher, although Esperance are without suspended defensive midfielder Seifallah Mahjoubi and have injury concerns over playmaker Kamel Zaiem.

Meanwhile, Al Hilal will hope to continue their good form in their maiden foray into the last eight of the competition since the league format was introduced 11 years ago.

Two successive home wins have set them up for a semi-final place, although opponents ASEC will be desperate to win to keep alive their hopes of reaching the semi-finals for a second successive year.

Group A pace setters Etoile Sahel also have a chance to seal qualification for the final four, although they need to win away in Algiers on Friday and hope for an advantageous result in the other group encounter in Tripoli.

Etoile Sahel, sitting on seven points, are away at JS Kabylie hoping for a repeat of the 3-0 win they achieved over the Algerians a fortnight ago.

Al Ittihad of Libya host Morocco’s Royal Armed Forces in the other match in Tripoli on Friday.

Wins for both Etoile and Al Ittihad would put the Tunisians into the semi-finals and will also set unfancied Al Ittihad on course for a place in the last four. 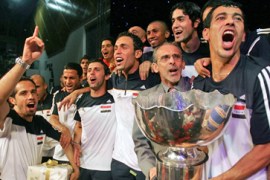 Iraq celebrate all the way home

Celebrations for victorious Iraq team in UAE and Jordan, but not yet in Iraq.