In the fields and terraces of the occupied West Bank, a Palestinian woman is leading a quiet revolution.

Inspired by memories of her grandmother and the delicious food of her childhood, Vivien wants to reintroduce long forgotten Palestinian produce to the tables of people across the West Bank and beyond. And she believes these organic, climate change-resistant seeds are the key to that.

She experiments with growing the treasured seeds in her own garden beside the separation wall, under the watchful eye of Israeli soldiers. Popular local herbs and seasonal vegetables flourish as she tends to her garden with expert care and dreams of reviving and celebrating Palestinian food culture.

But can she persuade farmers struggling with the pressures imposed by the Israeli occupation and agri-business to embrace such traditional crop-growing methods?

To convince them of the value of the seeds, she sets up a travelling kitchen, taking her seeds and their produce on the road and reminding Palestinians of the power of food to capture the joy and beauty of home.

When I first heard of the Palestine Heirloom Seed Library, it immediately grabbed my attention.

Agriculture has always been synonymous with Palestine – ever since Jericho became one of the first places on earth where wheat was cultivated.

So I wondered whether Vivien Sansour, the founder of the Palestine Seed Library, also felt that age-old pull to the earth.

When I finally met her, I realised she was the “real deal”. Grounded and gregarious, she represented that free-willed, unconventional spirit that had resisted repression under the Israeli occupation and an increasingly conservative Palestinian society.

Working with mainly male farmers, she held her own and made neither her gender nor her upper-middle-class background part of any discussion – simply by ensuring everyone was treated as an equal.

As we filmed with her over four seasons, the entire team came to understand just how the stamina of one woman could spark a food movement to liberate a whole population from wayward ways of farming and the poison it consumes.

Vivien’s insight into the importance of food security and the need for clean and delicious nutrition seemed like common sense – except, of course, under Israeli occupation, food is not at the top of many peoples’ list of priorities.

However, with the help of her farmer comrades and environmental visionaries, Vivien is slowly but surely putting good, healthy food on the Palestinian agenda.

By going back to basics, Vivien and dozens of Palestinian farmers across the West Bank are creating a food movement which promises a healthier lifestyle, at a price – an investment that includes time, water, financial resources and hard work. The payoff is the hope of food security at a time when climate change is wreaking havoc with crops globally.

Heirloom seeds are of universal importance. As Vivien frequently points out: “This is not just about Palestine, this is about the whole world.” The need to reintroduce heirloom seeds to the marketplace and their fruit to the dinner table is necessary for healthy human survival.

This film was, unexpectedly, one of the most challenging I’ve made to date. Vivien insisted that our team remain a “fly on the wall” and our filming sprints in between her frequent travels made it a challenge to keep pace with her. Vivien splits her time between her hometown of Beit Jala, near Bethlehem, and “food comrades” in Central America and California, where she has spent more than a decade working with farmers.

She refused to be boxed in or to walk along the famously decorated Bethlehem Wall, where many Palestinian heroes are honoured with larger-than-life murals.

Vivien Sansour wanted to show us Palestine through the fava beans and molokhia, through the odd-shaped tomatoes and apricot seeds. She is unique and uniquely Palestinian in her love for refusing to implement rules that are imposed by others, because she doesn’t think those rules are right.

Her Bir Arts and Seeds centre in Beit Sahour is a hub for local and international visitors who want to participate in or learn about the movement.

Vivien resented our wish to call the film about the movement with which she is so intricately associated The Seed Queen – but we all felt that it was more than appropriate to crown her for her efforts to make our world a better place. 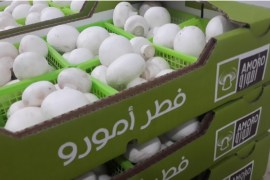 Amoro, the locally produced mushroom, has already taken roughly half of the market share from Israeli producers. 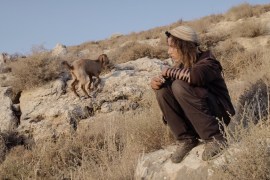 On death, forgiveness and revenge in the occupied territories

What a Palestinian grandfather, an Israeli soldier and the Hilltop Youth taught me about the power of forgiveness and violent radicalism.