Editor’s note: This film is no longer licensed to view online.

A 5,000-year-old archaeological site in Afghanistan is under threat of demolition as a Chinese mining company, eager to access the world’s largest untapped copper deposits, closes in.

China Metallurgical Group Corp (MCC) wants to extract the $100bn worth of copper lying beneath the ruins of the ancient Buddhist city of Mes Aynak.

Only 10 percent of Mes Aynak has been excavated, though, and some believe future discoveries at the site have the potential to redefine the history of Afghanistan and the history of Buddhism itself.

Saving Mes Aynak  follows Afghan archaeologist Qadir Temori as he races against time to stop the crumbling monasteries and ruins from being destroyed.

Temori and his fellow Afghan archaeologists face what seems an impossible battle against the Chinese, the Taliban and local politics to save their cultural heritage from likely erasure.

Saving Mes Aynak is ultimately a story of hope.

This is a film that is optimistic for a better future for Afghanistan, a country plagued by over 30 years of perpetual war, yet containing one of the richest cultural histories in the world. This documentary is dedicated to Afghan archaeologists, like Qadir Temori, who face constant threats from the Taliban, private industry, and their own government to save the ancient archaeological site Mes Aynak.

Saving Mes Aynak stands not only as a reflection of these courageous efforts to protect and preserve invaluable cultural heritage, but also represents a voice for the voiceless – a vehicle where Afghans can speak out on camera against these injustices happening all around them. Now these passionate, courageous voices will finally be heard.

I created Saving Mes Aynak to be a catalyst for change. My hope is that the documentary can actually save Mes Aynak by rallying international support to stop the destruction of this site scheduled for next year.

Mes Aynak, a 5,000 year-old treasure trove over 500,000 square meters in size, is truly one of the unseen wonders of the world. Comparable to Pompeii and Machu Picchu, these sprawling ruins feature hundreds of life-size or larger Buddha statues, dozens of temples, hidden caverns and thousands of priceless artifacts like birch-bark manuscripts, gold and copper coins, jewelry and intricate hand painted murals.

Mes Aynak is grand and awe-inspiring and has the magical ability to lure people (like me) from all over the world to fall in love with its mysterious beauty. Archaeologists estimate that only 10 percent of Mes Aynak has been discovered – only the tip of an enormous iceberg.

Who knows what still lays hidden, buried under a mountain of sand and earth? At the heart of the Silk Road, Mes Aynak was a melting pot of Asian and Middle Eastern cultures where travellers and Buddhists on pilgrimages could trade their wares, exchange cultural perspectives and even worship together at the same location.

Ironically, Mes Aynak was also one of the earliest known copper mining centres in the world – where the precious material was mined and smelted using ancient technology used in coin production and in the creation of ancient Buddhist artifacts. If Mes Aynak were to be tragically destroyed, Saving Mes Aynak would be the only visual record that this wondrous city ever existed.

As a civilised society, we cannot let that happen.

When the towering Buddhas of Bamiyan were destroyed by the Taliban in 2001, the world gasped in horror. People shouted, “Why did this happen?” and, “Why didn’t we stop it?”

The same tragic fate will soon happen to Mes Aynak unless we take immediate action. We have the power to stop this senseless destruction. It is my duty both as a filmmaker and as a global citizen to get this film seen by a massive global audience that can put pressure on the Afghan government to stop mining and save this incredible site for future generations. 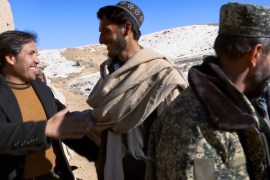 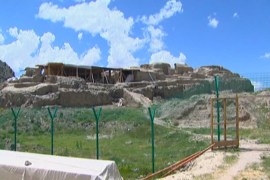 Race to save Afghanistan’s Buddhist treasures

Archaeologists look to save one of nation’s richest historical sites amid Chinese plans to mine for copper. 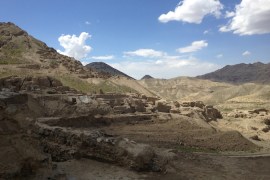 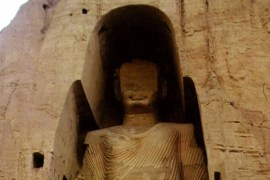 Can Afghanistan’s destroyed Buddha statues be restored to their former glory?