In a tough economy, the entire country worries about jobs, homes, and children’s futures. Yet how often do we think of the most vulnerable members of our society?

Around eight million people in the US have a developmental disability but the vast majority – around 80 percent – remain unemployed.

They live in the shadows of society – all too separate from the non-disabled world. Many Americans in the US with developmental disabilities who do work have historically found refuge in “workplaces” – coalitions of industry and social service that provide manufacturing jobs. Most states in the US have facilities such as these – in Toledo, Ohio, there is Lott Industries.

Over the years, Lott has employed up to 1,200 workers at a time. For decades the company excelled in building car parts, competing successfully with the non-disabled and achieving the highest quality ratings. However, with the decline of the car industry in neighbouring Detroit, Lott is faced with a crisis.

But for some whose lives are affected by disabilities, they are not sure that a workplace can evolve at all. 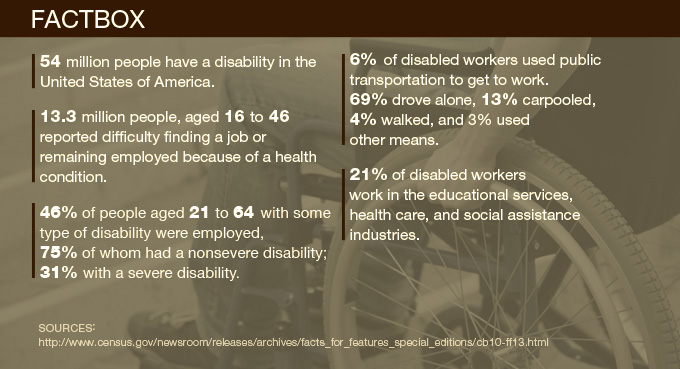 I started “A Whole Lott More” after I was in a nearly fatal car accident. During the 15 months that I couldn’t walk I researched what life and work was like for people who live with severe disabilities, both physical and intellectual. Much of what I found was sobering but one story in particular struck me: the story of Lott Industries.

Parents founded Lott Industries in 1956, and at its height the company employed 1,200 people with developmental disabilities and paid them competitive wages. But when Ford pulled out of town in 2008, the company began to struggle and the wages began to decrease. I arrived at Lott Industries to find the company on a 12-month, “going-out-of-business” curve, running out of time and desperate for a new direction.

The crisis at Lott Industries illustrates the decline of the US manufacturing sector. As the US economy moves away from manufacturing – much of which now takes place overseas – millions of working people are left behind. Income levels have stagnated since 2000 , and in some cases wages for low-income Americans have even declined. Workers with disabilities are twice as likely as those without disabilities to have an annual household income of $15,000 or less .

Employment for people with developmental disabilities remains an important conversation – and a key economic challenge – across the world. Everyone who cares about their community both on a human level and an economic level has a role to play. I hope that “A Whole Lott More” will show at first-hand the incredible contribution that those with developmental disabilities can bring to a work environment.

“A Whole Lott More” focuses on three individuals who have different opinions about their working lives. But they all want to work and to earn a living:

TJ, who has cerebral palsy and is deaf, is a three-time Paralympian and refuses to rely on government handouts.

Wanda, who has Turner’s and Down’s syndrome, is the fiery leader of the workers’ group at Lott Industries and believes that people with disabilities remain far too “invisible”.

Kevin is a recent high school graduate who has autism. Kevin does not feel that Lott Industries is the best option for him and, as for an increasing number of people with developmental disabilities, would prefer to look for a job in the wider community rather than at a specific workplace.

Community-based work is the ideal solution, and Lott Industries could also integrate more community-based opportunities into its business model. However, in a town like Toledo, where unemployment remains high, finding a job is not easy.

Ultimately, TJ, Wanda and Kevin’s stories together represent a larger picture of what life is like for someone with a developmental disability. We see at close hand their interests, their passions and their dreams. Whether Lott Industries remains the right job for them – or whether Lott continues to exist at all – the challenge remains and applies across the world. We must create opportunities for all working people, including those with disabilities, to earn a living wage. By doing that we will build societies that are more inclusive, more equal and increasingly sustainable.