When Alexandros Grigoropoulos was shot dead on December 6, 2008, the idea that a 15-year-old boy could die on a seemingly safe pedestrian street in the middle of Athens on a Saturday night, as he and his friends talked about which party they should go to, at the hands of a man who as a policeman was supposed to protect children like Alexandros, a man who was himself a father, it was hard to believe.

It was a war zone. Cars exploding, shop fronts burning. For ten days it was fire and stones everywhere

At that time I had recently become a father myself and the idea that anyone who had experienced the blessing of new life, could raise a gun and shoot a child made me sick.

For the generation of Alexandros, the 15-year-old children who took part in the riots that followed his death, the lessons learned were simply: The police are your enemy, politicians are in their overwhelming majority corrupt and your life has no value.

Finding people to talk about the riots was not so easy. Slogans like “the police are talking to you through the eight o’clock news” illustrate how journalists have earned the reputation of being paid liars.

Many times while filming, people and especially young people would suspiciously ask: “Who are you? Are from one of the Greek TV channels?”

During riots it is, of course, even worse. Both parties, police and demonstrators, for obvious reasons do not want to be photographed while acting in an incriminating manner.

But December 2008 was not just any riot, to these children it was an uprising most of them are proud to have taken part in and so after they got to know us they did eventually trust us with their stories.

A cycle of strikes, protest and violence

Three years later, on July 29, 2011, under the pressure of the financial crisis, the Greek parliament, faithfully following the instructions of the EU and IMF, voted to pass new austerity measures. The social problems that existed in 2008, stemming from corruption and the misuse of power, were still there, but were now compounded by the financial crisis.

Everyone, students included, found it very logical to throw a stone or anything else at the police

We were filming our protagonists taking part in protests outside parliament as the politicians inside were voting “yes” to austerity measures. Teargas filled the air and Amnesty International observers noted countless examples of excessive use of force by the Greek police on the Greek people who had gathered there to make their “no” vote heard. This, sadly, is what passes for democracy at work these days.

We all knew this would happen. The day before recession hit Greece one business was booming: Gas mask sales. Even my local hardware shop had completely sold out. When we go to demonstrations in Greece we expect this. The cycle of strikes, protest and violence has unfortunately become one of the few things you can rely on in Athens today.

Leaving the riots we stopped to get one more shot of the massive police presence. On a main street in Athens a policeman came and asked us to hand over our camera. We refused and within seconds were surrounded by police trying to grab the camera and threatening to arrest us. When I asked the policeman to calm down and not be so aggressive, he said he liked being aggressive and asked what did I think, that he was my friend?

While making this documentary I was inspired to see that despite what our young protagonists have experienced they still hold on to the thin line of fading hope for a better future; they fight for it day by day and keep their humanity, their need to love and to laugh, intact.

I wanted this documentary to give these children the opportunity to show their lives to the world. Lives all too often reduced by the world media to an image of a petrol bomb exploding. It is a powerful image, but it is not the only one in their lives. 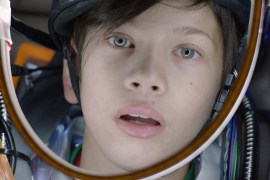