For some, chess is a game of the mind, a series of strategic moves. For Luis Cuello it was also an escape from the reality of prison life. Now a free man, Luis is determined to turn his life around, using principles he learned through chess.

After more than two decades in prison, Luis is now free but he does not want to forget his passion for the game. Guided by renowned Uruguayan chess master Pedro Lamas, he is using the game as a way to harness his own confidence and discipline, and turn his life around.

With no chess teachers currently working with prison inmates, Luis and Pedro get together to organise a chess tournament in jail. Luis feels the game can help others just as it helped him. 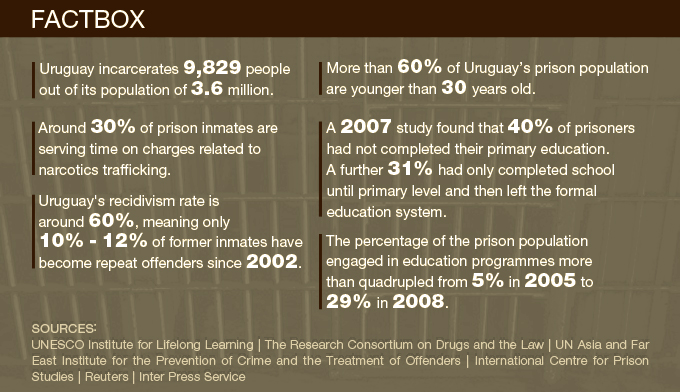 The most interesting aspect in this story was searching for, and discovering, Luis Cuello’s inner world. Luis is an ex-convict who has spent most of his life in prison, and now, after his release, is searching for a productive role to play within society.

Nowadays, Uruguay has a high rate of recidivism. Both the prison population and crime rates have shown a steady and alarming increase over the past few years. As in many other countries, there is the concern that prison rehabilitation is not serving its purpose and that new strategies are needed to help former convicts rejoin society.

In this story, chess provides that opportunity for change and learning, and it appears as an effective rehabilitation tool for an excluded social group.

While it starts as a means of filling the inmates’ idle time, chess, under Chess Master Pedro Lamas’ guidance, becomes a path to liberation, also providing parameters that can be applied to life out of prison.

Getting to know the Uruguayan chess champion and his work as an instructor in prison was the starting point. Through Pedro, we got acquainted with Luis – one of his most accomplished pupils in a maximum-security prison – who then became a chess instructor himself while still in prison.

Now, Luis is a free man and finds himself struggling to win back a place in society. It is a society which does not make things easy for people who have spent most of their lives out of the system.

Together, Luis and Pedro, our main characters in this film, represent hope in the face of adversity. They face their inner life and conflicts with an almost heroic attitude. The driving force behind our work was the wish to portray their story as faithfully as possible. Eventually, facts, people and events started taking their place in the narrative, just like pieces on a chessboard would.

During the shooting it became clear that reality is harder and more hopeless for people in prison than anyone can imagine from the outside. Serving a sentence and rejoining the free world is a tough challenge that requires courage as well as strategy.

Shooting in different penitentiaries was not easy either, since being back in his old prison affected Luis. Returning to such places was very hard on him and it was necessary to create certain conditions so that he could relax enough to open up and share his experiences.

The feeling of confinement and hopelessness you get when entering these places is indescribable. Recalling his life there and reflecting what it is for a person to be permanently enclosed within four walls was hard for Luis to do.

And it is that recounting of his struggle, living life between light and shadow, like the alternating black and white squares on a chessboard – having to adapt to prison life and rules and then readjust to completely different circumstances – that provided us with the threads to weave this story.

Prison life leaves deep wounds in people who have spent long years shut away. The feeling of insecurity: not knowing whether they will be able to find employment and earn a living, the fear of discrimination, of losing people close to them, the temptation to fall back on the only way of life they know, the dread of going back to crime and ending up as yet another ‘hopeless case’.

These are the wounds Luis is trying to heal with the help of chess, by applying the game’s principles and strategies to life while searching for a life project that enables him to feel free and part of society.