For generations, along Argentina’s Patagonia region, the Mapuche people have fought to preserve their cultural identity. Repressed and marginalised for more than a century, they fight to recover their full voice.

Inalen is a woman fighting not only for herself but, most importantly, for the future of her people – especially her daughter Rumel. Battling for a heritage lost for generations, she is using the tools of the 21st century, and has launched a broad spectrum media campaign that is focused on giving the next generation of Mapuche a stronger role in society.

She wants to restore a sense of history, the contributions to society and is working to achieve a better representation both culturally and politically. All the while, she is balancing the tug and pull of being a passionate activist and a loving mother striving to navigate the best way to realise her dreams for the Mapuche’s future.

Her quest is accompanied by high tensions. But with lots of effort, she tries to find the best way to fulfil her dreams for the future of her community.

Message for my daughter  is a documentary that immerses the viewer in a dissimilar universe, between the fragility of a child and her mother’s political empowerment.

It reflect the role of women in the construction of the culture and identity of the aboriginal peoples of Latin America, and how technological changes, access to media and education are contributing to the transformations taking place. 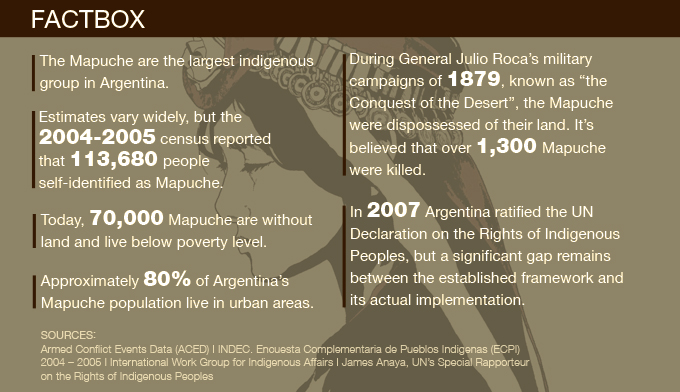 After many years of struggle the aboriginal people of Latin America have begun to recover a sense of their cultural identity after living in the long shadow of the country’s military dictatorship.

For the last 30 years of democracy, Argentina has experimented with a gradual revision of how it presents the various conquests affecting the civil rights and liberties of its aboriginal peoples. Message for my daughter is a film that provides evidence of this new paradigm.

Our story takes place deep in the heart of Patagonia (southern Argentina) in the city of Bariloche. I met Inalen Antillanca on the shores of the majestic lake Nahuel Huapi. There, together with a group of fellow activists from different Mapuche communities, we witnessed their asserting of mass media as their primary tool. We watch as Inalen asserts her identity and reclaims the memory of her community.

Something unexpected captivated me immediately: the relationship with her daughter Rumel. I was surprised when I found out how the most difficult part of her activism is related to her education and how she struggles to infuse her five-year-old daughter with the ancestral knowledge of the Mapuche community as she begins to engage with the wider world.

In this mother-daughter relationship there is something that makes them completely different from the rest and it is a view of the world that comes directly from their ancestors and that Inalen tries very hard to share. It is a world view of the universe, a spirituality that gives Rumel a completely different perspective from the reality that she might learn at school. What is this world view all about? Is it something that I can only try to explain or present in a documentary? That is the challenge.

I first met Inalen in early 2013 when she was speaking at a conference on audio-visual media before thousands of people. She was young but with great political ability and poise. I immediately wanted to know: Who is the woman behind the activist? What things move and scare her? What keeps her awake at night? What are her most intimate questions?

When I first began to spend time with her I decided she would be the protagonist of my next film. And when I finally found the means to produce it, we started a tough journey. It was not easy as I was always seen as a woman that the Mapuche call ‘Winca’ (the occidental, the white, as they called the conqueror). The to-ing and fro-ing, the extremely long conversations about how to tell the story, did not take long; it was a process of encounter between us.

That is how I met her family, saw her surroundings and came to understand her father, Horacio. He is the one who inspired Inalen with this strong demand for rights of the Mapuche communities. It was her father who took her to the epicentre of political fights from an early age. And for both Inalen and her daughter, Rumel, it is he who represents the incarnation of that legacy today. Rumel is a sweet and bright girl, but there is some kind of pain in her look; the pain of recognising herself as something different from the Westernised community around her, a pain that becomes a motor fast enough.

Activism is the strength that unites this family and it is the meeting point between the three generations. They exchange ideas about the world they want to build. It was exactly that that excited me the most. How do you infuse this idea of identity, formulated from public meetings and political debate, as well as from the intimate sphere? I was inspired with passion by their effort and sacrifice for the legacy of an ancestral culture in a world absorbed by the paradigm of capitalism, consumerism and discrimination towards the “Other”.

Message for my daughter is a story of love, activism and the expression of identity. This is very difficult story to capture because it takes place in many abstract ways that are complex for the eye to see, yet it is necessary to grasp the subtleties to make them appear. Identity is a fluid idea that does not start or end in any one way; we can name it at times, only to later lose it once again.