In rural, northern Argentina, profound economic isolation and severe environmental conditions are the order of the day. It is a region of the country called ‘The Impenetrable’ where there are few resources and fewer opportunities to change the day-to-day grind of rugged circumstances and disenfranchisement.

For Fernando Ibarra, an engineer and starry-eyed inventor, the region is his own personal laboratory, and this hardscrabble reality presents a fresh challenge – a place to develop and test drive solutions for almost every situation.

This film is a journey that takes us into this world. The story unfolds as Fernando travels through the region, in his funky 1947 truck named “Gasogene”, identifying both the projects he hopes to take on and the people he can work with to develop long-term solutions to local problems.

Fernando’s goal is not to be a “visiting angel” but to develop a core group of locally based leaders that can contribute to solving their own issues using sustainable and available resources.

He is committed to infusing the next generation with a passion for respecting resources and encouraging them to build home “grown” projects that they can develop, manage and operate themselves. 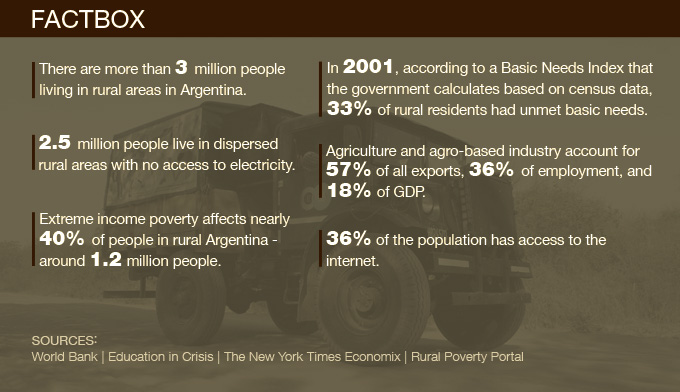 In the Argentinean territory, the region expands by a northern province called Chaco and is known as ‘Monte Impenetrable’ .

It is one of the most isolated and least populated areas. Currently there are 60,000 people – mostly indigenous, peasants and small farmers – who reside there, all grouped in scattered villages and small settlements. It is part of a region of 1,000,000 square kilometres shared by Argentina, Bolivia and Paraguay and is one of the most biologically diverse ecosystems on the planet.

Through my work, my relationship with this region has been varied, from the human to the environmental. This is how I become acquainted with the engineer Fernando Ibarra as he was touring ‘The Impenetrable’ in his 1947 Ford truck. It is a huge monster of a machine – originally designed for battlefields – that he transformed mechanically so that the fuel is produced from a wood-burning stove. As soon as I met him, I knew I had come across a very good story.

To design and develop a gasifier that would meet the requirements of a combustion V8 engine (thereby replacing gasoline) was the initial purpose of the project for Fernando. If that worked, it could lead to so much more.

But soon the transformation of a truck, originally made for war, into something with a completely different ‘life’ became more than just symbolic. It came to represent something that transcends borders and highlights the world’s need to develop alternative energy resources, and to once more look at some of the older technology more readily available in these isolated areas.

Once this beast was awakened, Fernando used it to carry some of the other machines he had developed over the years: individual water treatment plants, water extraction pumps driven – literally – by horse power, and mechanical systems that optimise the performance of the solar panels; each designed to help local communities replace conventional, petroleum-based energy, electricity grids or natural gas.

The story of Driving change focuses on two specific aspects of this trip: the installation of a refrigerator that Fernando and his team developed to work with wood; and finding teams to enable each community to develop and sustain their own alternative technology.

The final destination was School #593 in ‘La Illusion’ . It is a small and poorly constructed building that is home to a dozen students from different primary grades and where access to electricity is limited to a few hours.

In ‘La Illusion’ , the teacher Dario Gomez faces severe challenges and strives daily to ensure that the children lack nothing, despite the extreme conditions of life. His desire to have a working refrigerator was in the hope of improving their nutrition, since it would be the only way they could preserve fresh foods such as meat, vegetables and fruits.

When we joined Fernando, we witnessed the meeting with the villagers, the daily lives of rural school children, the enthusiasm for this new technology, and their disappointments when the fridge did not initially work as expected. Driving change is a documentary that portrays a moment in time that is part of a long community process which began much earlier and will continue long into the future.

Producing this film is a unique opportunity to make known to the world that, in a very poor area of South America, ideas are brewing that contribute to finding local alternatives to a global problem of ending the planet’s dependence on conventional energy.