On Wednesday, June 9 at 19:30 GMT:
The International Olympic Committee (IOC) is facing increasing pressure from the public to postpone or cancel the upcoming summer games in Tokyo.

Japanese public opinion is largely against holding the world’s largest sporting event while the nation struggles to contain its fourth wave of coronavirus and vaccinate its population. Public health officials and the Tokyo Doctors Association fear the event will place more strain on already crowded hospitals. And the head of the country’s doctors’ union warned that a new Olympic COVID variant could result from holding the event.

Despite the outcry and recent extension of a state of emergency in Tokyo, the IOC appears set to begin the games on July 23. They are confident that thousands of world-class athletes can compete safely in an Olympics “bubble”.

In this episode of The Stream, we’ll discuss the concerns and debate over whether the 2020 Summer Olympics should take place amid a pandemic.

On this episode of The Stream, we speak with:
Richard Pound
Member, International Olympic Committee 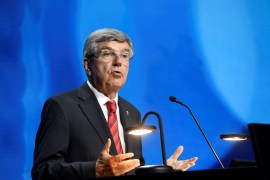