On Wednesday, June 2 at 19:30 GMT:
Ethiopia’s six-month-old conflict in its Tigray region has been marked by widespread reports of rape being used as a weapon by the Ethiopian and Eritrean armies, and by forces from the neighbouring Amhara region.

The violence is brutal. There are reports and witness accounts of rocks, nails and other objects being forced inside the bodies of women. There are allegations that men have been forced to rape their own family members or be killed. And aid group the International Rescue Committee has said women are being forced to engage in sexually exploitative relationships for money, food and shelter.

After months of denial and silence, Ethiopian Prime Minister Abiy Ahmed in March acknowledged that sexual violence was taking place. In a speech to parliament, he called war “a nasty thing” and suggested that troops from neighbouring Eritrea, which has fought on the Ethiopian government’s side throughout the conflict, were also responsible. Abiy, though, pointed the finger at the opposing side in the conflict, the Tigray People’s Liberation Front, for creating what he called the “propaganda of exaggeration”.

In April, the United Nations Security Council issued its first joint statement on the crisis, expressing “deep concern” about allegations of human rights violations and sexual violence against women and girls. And last week the US government – a key Ethiopian ally – announced sanctions and visa restrictions on government officials and members of security forces over the atrocities.

In this episode of The Stream, we ask how can the wave of horrific sexual violence be stopped and what accountability for these crimes should look like.

In this episode of The Stream, we are joined by:
Meaza Gidey, @meazaG_
Activist and International Relations Researcher 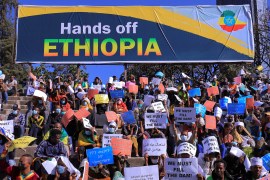 Ethiopians denounce US at pro-government rally in Addis Ababa

More than 10,000 protest against US economic and security sanctions on Ethiopia over the conflict in Tigray. 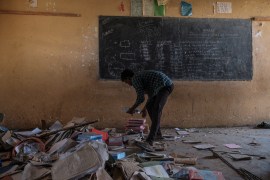 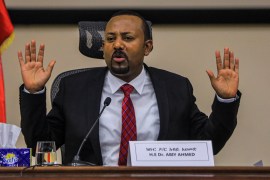 Under the banner of national sovereignty, Ethiopia is subverting Africa’s hard-won norms, principles and institutions.