Development is a challenge for many countries facing crises.

More than 135 million people worldwide are in need of humanitarian assistance and protection, and at least $25bn is required to meet those challenges.

According to the United Nations (UN), conflict is the main driver of humanitarian needs, followed by natural disasters.

Achim Steiner was appointed the head of the UN Development Programme (UNDP) in June 2017. The organisation was established in 1965 and works alongside UN member states to find solutions to the world’s pressing problems.

We cannot force a nation or its conflicting parties at gunpoint to exercise good governance and the rule of law.

This includes the conflict in Yemen, which has left 22 million people in need of humanitarian aid as of March 2018.

“What we are witnessing there is a catastrophe, first and above all for the people of Yemen, but it is also a catastrophe in developmental terms,” Steiner tells Al Jazeera. “This country is losing decades of the advancements that it had made on top of which we have the humanitarian emergencies.”

The UNDP warned the international community about Yemen years ago; it had shown typical predictors of crisis, including citizens’ loss of confidence in the government or in the ability to trust other interest groups in the country. “And into that void … then come geographical, geopolitical interests from outside.”

Asked about Libya, the oil-rich nation that’s been mired in conflict since the 2011 Arab uprisings and the subsequent overthrow of Muammar Gaddafi, Steiner says: “Libya post-Gaddafi was a political vacuum … The government system of Libya has imploded. Unfortunately, some people are making a lot of money in that vacuum and therefore have little interest in allowing a national governance structure and a democratic process to be established.”

“We cannot force a nation or its conflicting parties at gunpoint to exercise good governance and the rule of law,” Steiner says. “What we are left with is a situation that I think all of us consider fairly disastrous. And into that void, or into that chaotic situation, very often the UN is then asked to step in and perform miracles. It cannot do these miracles, it needs the international community and it needs the domestic parties to be willing to come to the table.”

Steiner also commented on the war in Syria, which is now entering its eighth year. While UNDP is operating out of Damascus and working with aid agencies to provide emergency programmes for current and returning residents, he says work is constrained by political tensions that make it impossible to operate throughout the country.

He sees a dilemma; countries are less willing to finance reconstruction before a political solution is found, but they also recognise the need to immediately help people in rebuilding their towns and livelihoods.

“We are trying to help … but until we have a political settlement, the work that UNDP would do in Syria is essentially very constrained,” Steiner says.

Despite global challenges – which also include low development in Burundi, Chad, South Sudan, Central African Republic and Niger, and worsening living conditions in Gaza – Steiner looks to the future “with hope”.

According to him, rates of extreme poverty have dropped significantly across the globe, while factors like literacy, life expectancy, and nutrition have improved, so “the story of development over the past 100 years is a story of phenomenal progress and success”.

“We are today a generation that is actually in a position to eliminate extreme poverty. It’s the first time we can say that in history. Now, will it happen? A lot depends on what a lot of people will do.”

He believes that successful development is directly linked to governments investing smartly.

“It is … a matter of political priorities,” he says, “and perhaps of asking ourselves how much more money are we going to invest in the illusive notion that militaries guarantee our national security when poverty and destitution and the sense of unfairness have actually been at the heart of virtually every civil strife, conflict, in the last 20 years.” 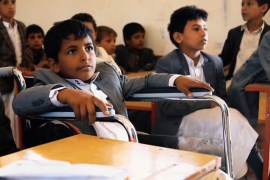 How the bombing of a busload of school children by Saudi-led coalition forces served as a backdrop to Yemen peace talks. 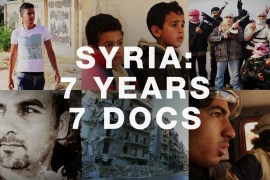 As Syria marks seven years of civil war, Al Jazeera looks back at some of our best documentaries charting the conflict.