In 2009, under the country’s first indigenous president a new constitution declared Bolivia a plurinational state – ending centuries of undeclared apartheid.

Opponents in the oil-rich eastern region launched a civil disobedience movement, confronting the east against the poorer, indigenous majority who support President Evo Morales. Critics denounced the president’s fiery socialist rhetoric and the nationalisation of Bolivia’s oil and gas industry in the poorest and most undeveloped nation in South America.

I have no regrets - in fact, I am pleased to have expelled the US ambassador, the Drug Enforcement Administration (DEA) and to have closed the US military base in Bolivia. Now, without a US ambassador, there is less conspiracy, and more political stability and social stability. Without the International Monetary Fund, we are better off economically.

Evo Morales, the president of Bolivia

Five years later, from the World Bank to the IMF, Evo Morales is getting full marks for overseeing an unprecedented transformation of Bolivia. Spurred by high commodity prices, economic growth is now the highest in the region.

And while the president’s anti-capitalist discourse is as strong as ever, a mix of mainstream economics and social programmes has dramatically reduced poverty and unemployment, while allowing the private sector to flourish.

“We have taken flight towards development. What others could not do in 180 years we have done in some nine years of profound changes …. We are going to make Bolivia the energy hub for South America,” says Morales.

In a region where personality cults are too common, millions of Bolivians have come to worship Morales.

He has just been re-elected after a disputed court decision allowing him to run for a third consecutive term as president.

“I believe that some revolutions, some transformations, are driven by a person. I don’t like it, but I am happy that there is now an Evo generation, a new generation of young men and women with a great deal of knowledge, principles, and values, who are assuming leadership. I am very pleased with the way young people are getting involved. Obviously, much depends on the process, on the steps we take to ensure good economic stability with social benefits,” Morales says.

Morales not only opposes the eradication and abolition of the coca leaf, the raw material for cocaine. He is also waging an international campaign to legalise and industrialise its use for traditional and medicinal purposes. He made headlines when he demonstrated how the plant is chewed at the United Nations, the same body that declared the plant an illegal narcotic in 1961.

He says: “It [drug trafficking] must be fought – we are convinced of that – and we are doing so more effectively and more wisely. When the United States was in control of counternarcotics, the US governments used drug trafficking for purely geopolitical purposes …. The US uses drug trafficking and terrorism for political control …. We have nationalised the fight against drug trafficking. “

“The best way to fight drug trafficking is to engage the people. Then there will not be zero coca, but neither can there be unfettered coca cultivation, because a problem does exist. As long as there is market demand for cocaine, the sacred, natural leaf, the medicinal coca leaf will always be associated with this illegal problem. The root cause of drug trafficking is demand, because the developed countries are not stopping the demand for cocaine.”

On Talk to Al Jazeera, President Evo Morales gives an insight into his personal life and discusses his controversial decision to legalise child labour, his expulsion of the US ambassador, the issue of drug trafficking – and whether he plans to step down when this term is over. 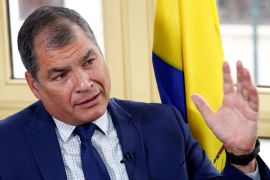