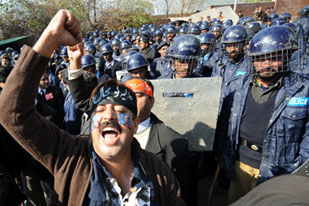 On Monday Riz speaks with Shaukat Aziz, the former prime minister of Pakistan.

Aziz became the first premier in the history of his country to serve a full term in office. Before becoming prime minister, he was finance minister, and guided his country’s economy to record growth.

But political and social problems continue to plague Pakistan, and elections scheduled for this month were delayed until Febuary 18 after the assassination of Benazir Bhutto, the former prime minister.

Aziz talks to Riz about the prospects for stability and democracy in Pakistan.

Watch this episode of Riz Khan Street Talk on Youtube

Join our debates on the Your Views section of the site