A champion of the favelas, Rio’s slum neighbourhoods, Marielle was also a vocal critic of the city’s security forces – both official and unofficial – and the high cost in civilian casualties of their war against Rio’s drug gangs.

So who killed her and why? And what does the investigation into her death reveal about the state of Brazil today?

I first started thinking about filming in Brazil in February 2018 when the Rio carnival got under way.

The country seemed divided as never before and the rise of the right was becoming a reality. Rio had already elected the ultraconservative, evangelical mayor Marcelo Crivella into office.

He was never going to be popular with the Samba schools but his decision to slash their budget gave rise to a giant float in the form of a butt with his name on it.

Commentators said that 2018 was the most political carnival since the end of the country’s dictatorship in 1985. One parade had a puppet of the conservative President Michel Temer as a vampire wearing the presidential sash under several false dollar bills, and another showed the former President Lula de Silva dressed in prison clothes.

Corruption proved the winning theme and the top prize went to Beija Flor, whose parade featured a huge rat that was in charge of Brazil, while politicians were seen holding briefcases lined with gold.

Carnival, I thought, would be a great way into assessing Brazil’s political landscape after the October 2018 elections.

And then Marielle Franco was killed just a month after carnival had ended. She was assassinated together with her driver Anderson Gomes by shots fired from a car after leaving an event that she spoke at on March 14, 2018.

Both a hero and a threat

Marielle’s effective activism, courage and clarity had made her a rising star in Brazil’s increasingly divided political world. As an Afro-Brazilian, gay, single mother from one of the city’s poorest neighbourhoods, she used her role as a city councillor to empower these very constituencies.

Her success in doing so made her a hero to some and a threat to others.

I watched the outpouring of grief and rage that took place not just in Brazil but also around the world, and then, like so many others, I began to follow the investigation into her murder.

The professionalism of the killers was obvious from the first moment, and soon the bullets and weapons were linked back to the police, giving rise to suspicions that the assassins were members of the security forces or belonged to Rio’s infamous paramilitary militia groups.

This more than anything else piqued my interest. We often see films about the drug gangs in Rio’s favelas but Rio’s militia groups had so far evaded the scrutiny of the international TV media.

As an Afro-Brazilian, gay, single mother from one of the city's poorest neighbourhoods, she used her role as a city councillor to empower these very constituencies. Her success in doing so made her a hero to some and a threat to others.

Back in 2007, Brazilian director Jose Padilha made the multiple-award-winning movie Elite Squad that charted the militias’ rise. It told the story of members of Rio’s military police who joined militia groups because they felt that the law was not tough enough to take on the drug gangs. Elite Squad, and the sequel Elite Squad – The Enemy Within showed in gritty detail the violence, extrajudicial killings, and links with corrupt politicians that characterise these mafia-like groups.

It was a story better told in fiction than in fact: a year later, a team from the O Dia newspaper went undercover in a militia-controlled area but were discovered. All three were subjected to electric shock, asphyxiated with plastic bags, and beaten several times by kidnappers who insisted they were not criminals but policemen “acting ahead of justice”.

Amazingly, as I began my own research I was soon talking to some of the very people on whose stories the Elite Squad characters were based: Vera Araujo, a courageous journalist who has dedicated her life to exposing the militia and who knows more about Marielle’s killing than most investigators, and also Marcello Freixo, leader of the PSOL party that Marielle belonged to and her political mentor.

It was Freixo who had first put the militia into the spotlight by initiating a parliamentary inquiry in 2008 that resulted in a 300-page report and led to hundreds of arrests and recommended charges against 225 people including city councillors, police officers, prison officers and firefighters.

Until today, Freixo, now a congressman, lives under police protection.

Marielle, too, had contributed to the report and neither she nor her party, PSOL, shied away from calling out corruption and abuses of power.

What interested me, as a reporter and filmmaker, was not just the importance of putting Marielle’s life and death on record, but also the idea of using a film about the investigation into her killing as a way of shedding light on Rio’s out of control security forces and militia.

An early theory was that Marielle had been murdered by the security forces themselves. She was a frequent and fearless critic of the police’s military-style operations in Rio’s favelas that left a trail of death and she even took the risk of naming specific police battalions.

However, the idea that the police killed Marielle Franco was side-lined when Rio’s homicide division collected testimony from a man who said he had heard city councillor Marcello Siciliano order militia leader Orlando Oliveira de Araujo aka “Curicica” to kill Marielle.

Investigators said they believed that Marielle had clashed with Siciliano because she empowered communities in neighbourhoods where he had construction and real estate interests.

This placed the motive for Marielle’s murder right into the militia heartland in Rio’s west zone where corrupt politicians and militia members have built entire neighbourhoods, not filled with low-lying shacks but with multistorey dwellings, lacking any official permission. Yet, unlike the favelas where drug dealers show off their guns and drugs to visiting journalists these militia-held territories, which are home to two million residents and encompass a quarter of Rio, were completely off limits to us.

The Siciliano-Curicica theory soon proved deeply flawed. Both, the councilman and the militia leader who is imprisoned in northern Brazil, were insisting that they were being framed with the help of the police.

Angrily, Curicica started divulging the secrets of Rio’s militia and his testimony gave rise to two new investigations, one by Rio’s public prosecutor into Marielle’s killing and another by Brazil’s Federal Police into homicide police corruption. They are investigations full of twists and turns that will hopefully be completed so that one day another movie can tell the full story.

To date two things stand out for me:

Many feel that Marielle is wielding as much power in death as she did in life. The investigation into her killing by Rio’s Public Prosecutor has resulted in the indictment and arrest of some of Rio’s most notorious militia leaders and the investigation seems far from over. After an era of impunity, some justice seems to be coming.

Secondly, the investigation into Marielle’s killing is also revealing uncannily close connections that the newly elected President Jair Bolsonaro and his family have with corrupt policemen and the militia.

We were in Rio when Marielle’s two alleged killers were arrested. The man who allegedly pulled the trigger lived in the same condominium as Bolsonaro and his daughter dated the president’s son, while the alleged driver of the car posted a photo of himself and the president on Facebook. The president’s family also had connections with other alleged militia members arrested by the Ministerio Publico.

At best, the militia are simply the president’s constituency, at worst, the president and his family have some tough questions to answer.

Marielle’s killers may have been caught but until those who ordered the killing have been identified, questions and suspicions will remain.

And we did end up filming carnival, too, it became a battleground between the revellers and Bolsonaro. Many on the left, like our interviewee Flavia Candido, dressed up as an orange in a wordplay that ridicules the alleged corruption of Bolsonaro’s son Flavio.

Marielle’s supporters found some justice in the Sambodrome. The 2019 winning Samba school was Mangueira who had put Marielle’s life and achievements at the very centre of its parade. Her mentor, Congressman Marcello Freixo and her partner, Monica, took part in the parade, proving that in Brazil carnival will stay political for some time to come. 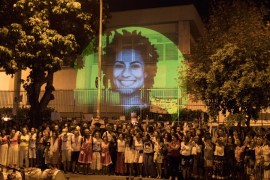 Rights groups say there were record number of police killings and racial violence in the Brazilian city in 2018.