Half a century ago, when Fidel Castro’s revolutionary forces entered the Cuban capital Havana, the new leader pledged to improve the lives of the poor by putting an end to capitalist excess.

One of the revolutionary government’s key measures was the elimination of the property market as a lucrative business. Housing was declared a human right, private rental was abolished and most Cubans were given free properties to live in.

But with a US embargo declared on the revolutionary island and its finances dependent on an inefficient state-driven economy, the government ran out of money and vast parts of Havana fell into decline.

In a radical move, Raul Castro opened up the economy in 2011. Property laws were reversed and Cubans were allowed to buy and sell their homes once more.

The government says its revolutionary vision hasn’t changed and that the reforms are aimed at safeguarding rather than dismantling socialism. But will the re-introduction of private property make Havana’s urban poor worse off? And how will the government deal with the growing, wealthy new class that the regime once fought so hard to defeat?

In Cuba for Sale, reporter Juliana Ruhfus and filmmaker Seamus Mirodan investigate the impact of the country’s recent economic changes and whether the re-introduction of private property heralds an end to Cuban socialism.

Havana is often described as a time capsule, its architecture unchanged though much of the 20th century. Outsiders walking the streets of the city’s old town find themselves harking back to a time when monolithic skyscrapers, new builds and concrete tower blocks were but a glint in a 1940s architect’s eye.

They are transported back to something that feels like a purer era, characterised by a plethora of architectural styles – colonial, neo-Gothic, Baroque, Beaux Arts and Art Deco mansions sit side by side, resplendent in their differences and the unique cityscape they create.

It was a perhaps unintended side-effect of Fidel Castro’s revolution that the capital city was preserved in this way. His predecessor, the capitalist and US-centric President Fulgencio Batista, planned to demolish major portions of the old city to make way for what he saw as modern development: the building of high-rise apartments, offices and roadways aimed at connecting the rest of the city to the previously undeveloped lands to the east.

But when the revolutionary rebel forces arrived in Havana in 1959, ousting Batista and sending the president and his supporters, including much of Havana’s economic elite, packing into exile, new leader Fidel Castro turned his fledgling administration’s attention away from the urban setting and focused his finances on developing agricultural land in an effort to better the conditions of the “campesinos” or rural peasant farmers.

After all, it was the woeful and abject poverty suffered by these campesinos that had provided the major stimulus – and troops – for the revolution.

As a result, the streets and buildings of Old Havana remained frozen in time, but their inhabitants changed dramatically. When the original owners of the city’s colonial mansions fled, it was in some cases their servants who remained behind, taking their properties over. In others, poorer residents simply moved into abandoned houses or were given such properties by the government which had officially expropriated all housing from previous owners.

But such huge living quarters for one nuclear family was seen as bourgeois, so many of the new inhabitants invited relatives from the countryside to come and join them. Over the years, mansions that had once housed a single family came to be home to tens of people living in overcrowded conditions, allowing once glorious architectural gems to fall into dilapidated decline.

The unplanned structural modifications made by the new inhabitants to create more room, coupled with damage caused by high humidity and a lack of maintenance, have made many of these buildings unsafe. So unsafe that last year alone, one building collapsed in Havana every second day, sometimes with lethal consequences.

It is precisely this sense of unique architecture, densely populated by thriving communities amid a distinct lack of polish, that has come to not only characterise Havana but also attract a stream of foreign tourists to visit each year, even during the times when gaining a visa required a bizarre and convoluted process that could take months to engineer.

Today, Cuba’s doors have swung widely open to those from around the world, even the country’s former arch-nemesis, the United States.

In 2015, three million tourists descended on the city and many more are currently planning their trips, desperate “to see it before it changes”. Their rush to visit expresses an expectation, widely held by those inside and out, that change is inevitable following Cuba’s economic and social reawakening and that the city will soon come to resemble others across the western hemisphere – the time capsule will be lost for ever.

But casting aside the preoccupations of tourists looking for a temporary glimpse into the past, it is clear that if the Cuban government wants to improve the lives of its citizens, it has no option but to reform its economy.

President Raul Castro has recently enacted a series of reforms that appear to follow the model China has come to exemplify of a socialist state pursuing a market economy. The burning question, however, remains: how can this be done without gentrification and growing inequality, leaving Cuba’s poorest citizens, the very people the revolution sought to elevate and protect, vulnerable to being cast aside, sent to live in satellite cities and relative ghettos, seeking employment from a new class of entrepreneurs and financial elite, who inevitably seek to develop the city and country in their own image?

One possible answer is embodied by the Office of the Historian of the City of Havana (OHCH). It’s a branch of the Cuban government which re-invests the profits from tourism into the rehabilitation of failing buildings. It represents the government’s best method to date of attempting to distribute the influx of foreign capital more evenly among its citizens. An immensely powerful institution, it publishes a master plan that serves as a blueprint for Havana’s development.

In Plaza Vieja, one of the city’s most stunning historical squares, the OHCH has developed several old colonial mansions into thriving businesses such as cafes and restaurants. But, according to its chief architect Ayleen Robaina, the master plan has also been designed to keep as many of the original residents as possible living in the city centre. Still, even she admits that this strategy is not necessarily “sustainable” across the city or country as a whole and ultimately represents “a utopic vision”.

Others in Havana say that it is not even benefiting everyday citizens in the old city today. A group of residents from a tenement slum, just off the Plaza Vieja, say they fear being pushed out by the new developments. They challenged Robaina’s assertion that new apartments, being built opposite the crumbling former colonial mansion they currently live in, are likely to go to local families.

“Those aren’t for families or anything like that,” said a rickshaw driver as we walked past with Robaina.

The house these residents currently occupy is home to more than 40 families. They don’t pay rent, and haven’t for decades, but they live in incredibly cramped, squalid dwellings fashioned out of the building’s original rooms. Two hundred thousand out of Havana’s 2.2 million residents live in conditions like these. Often one room is divided so that it can house two or more families, and then further divided by planks laid horizontally to create an extra floor to sleep on.

“You know what the point is,” Niclaysis Sanchez, a shoe repairman, whose relatives live in the tenement near Plaza Vieja, says. “These people here, who have lived all their lives here, whose children were born here, whose schools are here, don’t send them to temporary shelters, don’t send them out to the countryside. Send them opposite.”

His words reflect a general fear we heard time and again from the city’s poorest residents who claim that they are being moved out to satellite cities and temporary accommodation in the suburbs to make way for the touristic development of central Havana.

And the influx of foreign capital from tourism, they claim, is an economic bubble they cannot access due to corruption.

But Ayleen Robaina says the real issue is that the government simply doesn’t have the funds to cater for so much need.

“The perfect situation would be to have enough new housing to give to all of them, but there are many limitations,” she says. “The country has made priorities in education or healthcare and then housing has been waiting too long.”

Tourism is not the Cuban state’s only strategy to try to provide desperately needed revenue streams. Since 2011, Raul Castro has allowed Cubans to open private businesses for the first time since the revolution and once again buy and sell their homes, though, for now, only to other Cubans. The hope is that this will inspire citizens to improve and renovate their properties and then sell them on for a profit; in this way individual investments will also create income across the economy as a whole.

The government is also opening up to foreign investment and currently planning seven joint ventures with foreign companies to create mega tourism developments with golf courses, luxury hotels and million-dollar beachfront properties, which will be available to be bought by foreigners. In an effort to ensure that these projects remain under its control and continue to provide for the state coffers, as well as the pockets of investors, the government is retaining a 51 percent stake in each venture.

Whether the government can rein in shareholders and venture capital funds to keep Cuba working for the majority of its people remains to be seen. To many observers, it looks like capitalism is sneaking into Cuba through the back door. With it they believe will come the inevitable inequalities and uniform, characterless cityscapes that have become so familiar in cities of the modern world.

Still, Cuba is its own beast and many of those who seem most vulnerable to these changes appear to continue to have faith in the revolution started in the 1950s. Despite deploring the conditions his relatives live in, Niclaysis Sanchez, the shoemaker from the tenement slum near the Plaza Vieja, says that his faith in what began all those years ago remains unshaken.

“There’s plenty of revolution left! I can assure you of that!” he says. 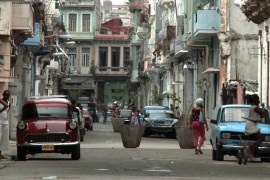 How will improving relations between communist Cuba and the capitalist US affect the lives of people on both sides? 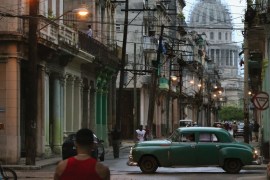 Does the diplomatic thaw mean the end of old Havana? 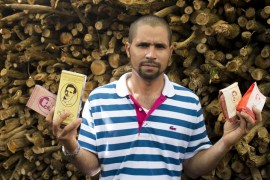