Tens of thousands of migrant workers have left India’s large cities, looking to return to their rural homes after a nationwide lockdown left them without jobs or income.

The lockdown was put in place as an attempt to slow the spread of COVID-19. But as the mass movement of workers continues, it threatens to spread the coronavirus into rural areas.

Opposition leaders have accused the government of being caught off guard by the exodus with no contingency plan in place.

The Indian government announced a $22.6bn economic stimulus plan on Thursday to provide direct cash transfers and food handouts to the country’s poor.

A quarter of India’s 1.3 billion people live below the poverty line.

With most modes of transport shut down, many have been forced to walk hundreds of kilometres to reach their homes.

“We have problems,” a migrant worker said. “We have a small child and we don’t have anything to eat.”

Every year, millions of migrant workers move from India’s rural areas to large cities to find work at construction sites or factories to send money back to their hometowns and villages.

In some parts of India, local authorities are now providing buses as train services remain suspended and train carriages are being repurposed in the fight against the virus.

“We have converted this coach into an isolation ward,” Dipen Burman, an engineer told Reuters news agency. “We can keep up to nine patients in one coach.”

New Delhi’s homeless shelters are also overflowing and school buildings are now being used to house the homeless.

This report was produced and edited by Al Jazeera NewsFeed’s Hassan Ghani. 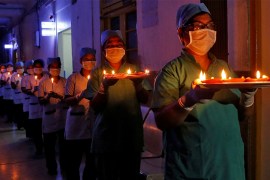 Coronavirus: India lights up to heed Modi’s call for unity

Twinkling flames from candles and traditional lamps light up night sky to mark fight against the coronavirus pandemic. 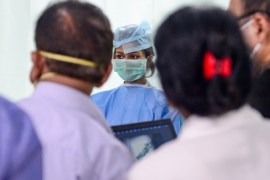 Health and other frontline workers have been threatened, many of them evicted from rented houses over fear of infection.