Residents of the Agdam district of Azerbaijan are returning home for the first time in almost 30 years as part of a deal to end fighting in Nagorno-Karabakh.

The district’s western part was among areas captured by ethnic Armenian forces during a war for the wider Nagorno-Karabakh region in the 1990s.

Folk singer Ilhamiz Pashayev was among hundreds of thousands of Azeris who were forced to leave their homes.

He has lived close by ever since and plans to return now that Armenian forces have withdrawn.

“Agdam is my heart and soul,” Pashayev says. “That’s why I live here. I never stopped singing, even when the shells rained down. After getting back Agdam, I’m very happy.”

Further west, in Kalbajar district, ethnic Armenians prepare to leave another area due to be returned to Azerbaijan.

“We were living here for 25 years, we built a house,” Grigory Grigoryan, a Kalbajar resident, says. “And now it is very difficult for us to leave, to leave this village where my children grew up and went to school.”

This video was edited by Al Jazeera Newsfeed’s Hassan Ghani. 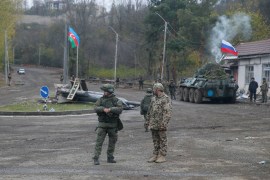 Ankara managed to get a foothold in the South Caucasus, but Moscow still has the upper hand in the region. 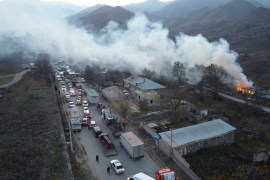 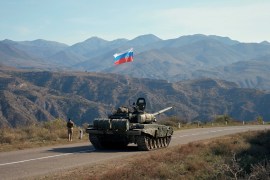