A deadly and pervasive disease affects hundreds of millions of people worldwide and the Senegal basin is the site of the biggest outbreak that the world has ever seen.

Schistosomiasis, also known as  snail fever or bilharzia ,  is a water-borne parasite that once inside the body stunts physical and intellectual growth, particularly in children.

Alassane Ndiaye, a Lifelines’ “Health Hero”, is a man on a mission. His motorbike takes him around villages in the Senegal basin where he works tirelessly in the battle against schistosomiasis in the community and surrounding waters.

I’ve seen under a microscope what the disease does. Whoever knows about it must inform people about its dangers. Whenever I am given pills for the people, I’ll stay up all night. I will not go to bed until I have treated them all.

The outbreak started 30 years ago when a dam was built across the Senegal River at the point where it drains into the sea. Up to 90 percent of the population in the river basin was infected and no one understood why — until a development specialist linked the explosion of schistosomiasis to the extinction of river prawns in the river system caused by the dam.

River prawns prey on the snails that carry the schistosomiasis parasite. Without prawns, the snail population increased, and so did the risk of schisto infection for everyone who entered the river.

Now Alassane works with project leader Elizabeth Huttinger on a novel experiment to reintroduce prawns into the river system and interrupt the cycle of the “schisto” disease that leads to poverty.

Will this unique and innovative solution be enough to free these communities from the burden of schistosomiasis?

Lifelines: The Quest for Global  Health profiles the extraordinary work of global health workers in their quest to rid the world of the deadly, neglected diseases and conditions that keep millions of people in poverty.

By Lifelines
More episodes from
Lifelines

How to Slay a Dragon 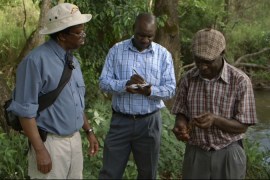 How to Slay a Dragon