“We got the best deal possible. Everyone would have liked to get a little more,” were the words of the Colombian government negotiator as the deal was signed with FARC rebels, or the Revolutionary Armed Forces of Colombia, to end 52 years of civil war.

For the government of President Juan Manuel Santos, the goal was simple: end the war without giving away too much.

A demobilisation process is under way for FARC fighters to hand over their weapons.

The armed group is also beginning its transformation into a political party.

But what are the hurdles to a permanent peace? And what does it all mean for Colombia?

Kristian Herbolzheimer – Director of the Philippines and Colombia Programmes at Conciliation Resources.

Annette Idler – Director of Studies at the Changing Character of War Programme, University of Oxford.

Bernardo Perez-Salazar – Researcher at the Armed Conflict and Peace Process at the Catholic University of Colombia. 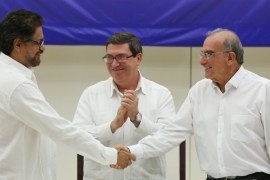