Latin America is facing the largest refugee crisis in its history as hundreds of thousands of people flee Venezuela to escape severe economic hardship.

Once one of the region’s wealthiest countries, Venezuela has been hit hard by a drop in oil prices from 2014 onwards, with the economic situation worsening under the fiscal mismanagement of President Nicolas Maduro.

Since Maduro took power following the death of the country’s long-time leader, Hugo Chavez, in 2013, the Venezuelan bolivar has lost some 99.99 percent of its value against the US dollar on the black market. Few Venezuelans have access to official exchange rates, which have been controlled since 2003.

The president blames the crisis on an “economic war” against the socialist country by opponents, including the United States but for many of the country’s 31.5 million people, the exact reason things went wrong is no longer important.

If Chavez were alive this would not be happening

The imploding economy has led to shortages of basic items such as food and medicine and, according to the International Organization for Migration (IOM), some 1.6 million Venezuelans have left the country since 2015.

For those who remain, daily life is a struggle and hopes of a better life in Colombia, Brazil or elsewhere are never far from their minds.

Three Venezuelans share their hopes, dreams and fears for the future with Al Jazeera:

“The situation in the country has become so difficult. No matter how hard you work, the money is never enough to buy anything, including materials and tools to work with because they are extremely expensive.

“About a year and five months ago is when life began to become unbearable here … I can’t buy food, my mother needs special treatment for high blood pressure but she can’t get it because it’s too expensive. Her entire pension goes to pay for her medication.

This sinks deeper and deeper every day and we're abandoned. I can't survive.

“I will leave in two months if I can sell what I need to sell. It’s not because I want to emigrate from my country, I want to move forward with my profession and help my mother with her treatment and food. It hurts me to leave my mother here all by herself because my brother went to Peru two months ago.

“I want to be able to work and have the means to survive and help my family. Some people say it’s the government’s fault, but we are also the ones to blame. We chose this president knowing that this could happen.

“Chavez was one thing, but Nicolas Maduro is a different story. I voted for him, but I regret it now. I’ve never seen a government as chaotic as the one we have today. It’s destroyed Venezuelans, our children, the elderly, the hospitals, everything.

“Everything that is happening here is terrible. This sinks deeper and deeper every day and we’re abandoned. I can’t survive.”

“I feel trapped because I don’t have the freedom to travel to other countries like Venezuelans used to. Also, I have an illness that is very difficult to treat. I have haemophilia but I don’t have any information about if I would need medical insurance abroad – I don’t know what treatment there would be for an immigrant.

There are no opportunities, there is no future.

“I can’t live a regular day-to-day life, I have to be very careful. I avoid going out because I’m scared of running out of medicine. This disease attacks your joints and produces internal bleeding. With the correct dose of medicine you can prevent the bleeding, but when we don’t have it we become practically immobilised. We can spend days in pain, unable to sleep.

“I am walking with crutches because I have so much pain in my legs. Had I gotten the correct dose, I’d be in perfect shape right now. With the right treatment, you’re a normal person, like someone who isn’t sick. It’s like having a shield. When you don’t have the medicine, the body deteriorates terribly. You even run the risk of bleeding to death.

“I’d be happy if Venezuela went back to what it was before. I’d be happy if this crisis ends. It’s impossible to live here now. You are really unhappy here. There are no opportunities, there is no future”.

“It’s difficult to watch family members leave, especially when you’re used to living with them your entire life and then they’re gone.

“I thought the country would get better but day by day, it’s more difficult to overcome this situation. President Maduro said that by 2020, Venezuela would be out of this crisis.

“My children are right to leave because they have their own children to think about. Since they can’t get a job in Venezuela, they went out looking for one because they are professionals. I ask the president of Peru: Do not mistreat Venezuelans, support them and help them. We’re not criminals or troublemakers. We’re humble and hard working people. We’re educated professionals.

“Things here are getting worse every day. There are too many malnourished children, there are no medicines and no food. It hurts to say this about Venezuela because Venezuela is a very rich country with lots of potential.

Editor’s note: These interviews been edited for clarity and brevity. 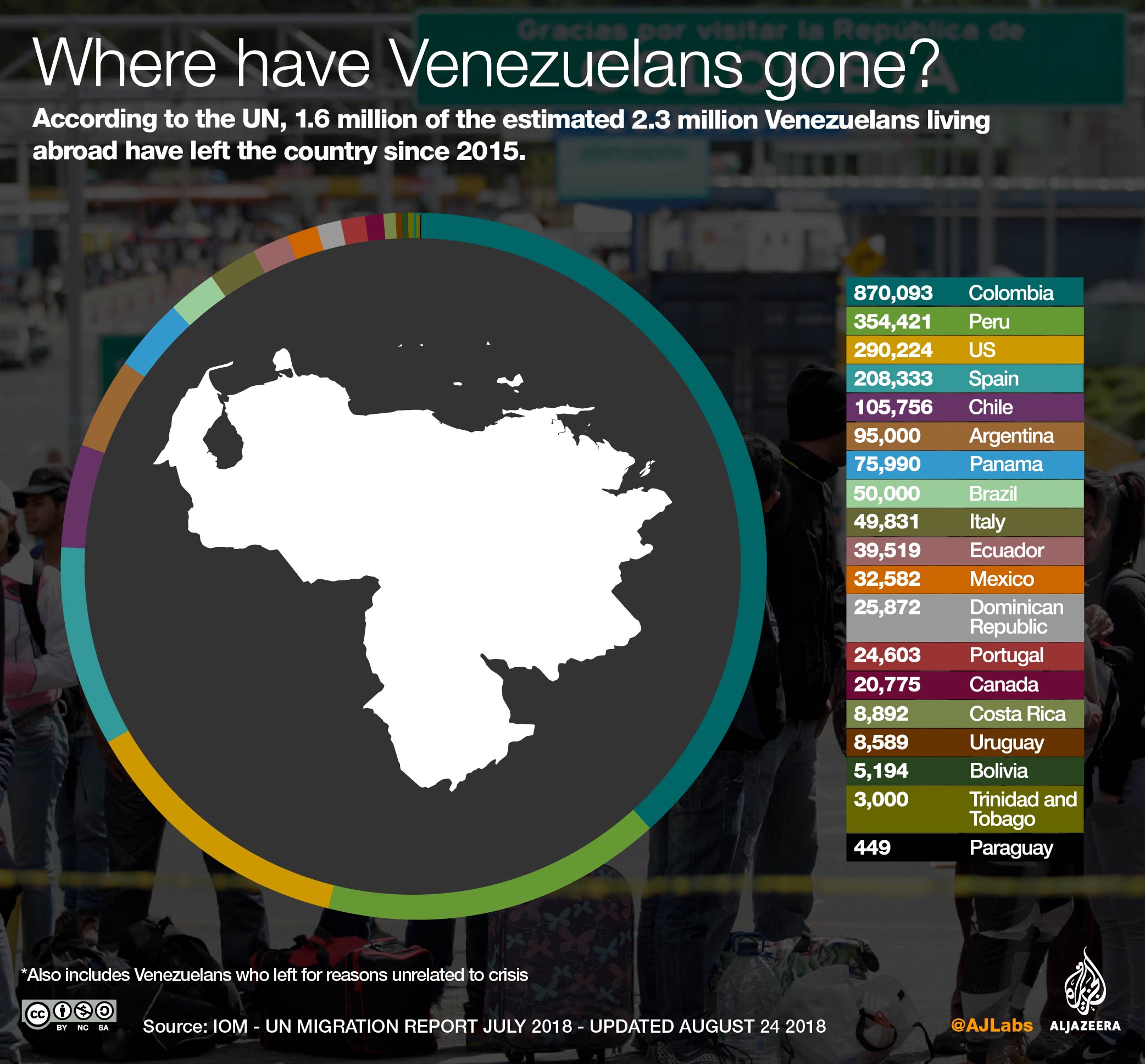 Talk to Al Jazeera: In the Field