Editor’s note: This film is no longer available to view online.

In 1989, the withdrawal of Soviet troops from Afghanistan marked the end of a violent occupation that had started almost 10 years earlier. The Soviet invasion, which had resulted in a protracted war for independence, fragmented the country and changed the political landscape forever.

The sudden power vacuum of the post-Soviet era resulted in an upsurge of fighting as armed factions began to push for more territory.

In the North, people gathered around the Northern Alliance and its leader Ahmed Shah Masood, who was known as the “Lion of Pansjer”.

By 1994, in the South and the East another movement began to assert itself in ethnic Pashtun areas. They called themselves the Taliban and were supported militarily by neighbouring Pakistan.

When the Iron Curtain fell, a member of American gas and oil explorer Unocal (Union Oil Company of California) scouted the former Soviet Union territories for opportunities and came across the gas reserves in Turkmenistan.

“Turkmenistan was stuck with reserves and no market,” says John Imle, former CEO of Unocal.

Unocal’s plans were to build two pipelines, one for oil and the other for gas, travelling through Turkmenistan, Afghanistan, Pakistan and India – a distance of well over 1,700km. Afghanistan was set to earn $400m per year in transportation costs, which would significantly enrich Afghan government’s income at that time.

“Taliban wanted the reconstruction of the country, so that’s why we were interested in working with Unocal,” says Wakil Ahmad Muttawakil, former Taliban foreign secretary.

“When a company wants to establish itself in Afghanistan it will bring a lot of investment. It’s natural that this has a positive effect on mutual relationships, but our main goal was to improve economic conditions in Afghanistan.”

In the meantime, a power vacuum had been created with the withdrawal of Soviet forces from Afghanistan.

The North saw the rise of the Northern Alliance, led by Ahmed Shah Masood. In the South and the East, the Taliban – supported by Pakistan – had begun to assert themselves in ethnic Pashtun areas.

“Worldwide there was a very broad perception that Unocal was working with the US government to promote the Taliban as the most likely source for a stable, single group controlling Afghanistan. And there was… an effort or hopefulness on the part of some that if this pipeline could be put through, it could be a source of stability or development for Afghanistan. I personally didn’t like the idea that that stability would mean that the Taliban would be in charge,” says Julie Sirrs, former officer at the Defense Intelligence Agency.

Advice to form a united government recognised by the UN in order to garner World Bank and Asian Development Bank interest fell flat. The Taliban were on the offensive and publicly executed former President Mohammed Najbullah who had been spared by the Northern Alliance.

Unocal continued with its plans and flew core members of the Taliban to Sugar Land, Texas and Unocal headquarters to further investigate the project.

At the same time, a new leader had begun to reestablish himself in Afghanistan post-Soviet rule: Osama bin Laden.

The Bill Clinton administration, now aware of the value of the pipeline, continued in its efforts to influence the Taliban regime. However, the 1998 bombings of the US embassy in Nairobi claimed by al-Qaeda changed everything.

Plans to support the Taliban’s bid for power in hopes of “stability” backfired.

“He had declared war on America and the simultaneous bombings of our embassies in Tanzania and Kenya really put us on a war-footing with Osama bin Laden. From that point on we were actually trying to kill him,” says Nancy Soderberg, former US ambassador at the United Nations.

In 1997, US President Bill Clinton ordered missiles to be fired at al-Qaeda bases in Afghanistan. Several operators were killed, but Bin Laden escaped unscathed. Unocal decided to withdraw from the project.

“I remember when President Clinton sent some cruise missiles into Afghanistan…. that’s when I told my boss and the board of directors that it was time… this wasn’t gonna go anywhere any time soon,” says Marty Miller, Unocal’s former vice president.

It was at this time that the Taliban had become wary of Osama bin Laden and al-Qaeda’s scope of international attack. They were not looking to make Afghanistan a base for these activities.

With the pipeline negotiations hanging by a thread, and the threat of al-Qaeda hanging over the US government, America needed a reason to invade Afghanistan – and bin Laden gave it to them on September 11.

While the stated aim of the invasion was to dismantle al-Qaeda, denying it a safe base of operations by removing the Taliban from power, al-Qaeda claimed otherwise. The group stated that the attack on the Twin Towers was a response to the Bush administration’s threats to attack Afghanistan.

According to sources, Taliban officials were told they could accept a ‘carpet of gold’ or a ‘carpet of bombs.’
Talks of bringing the ‘peace’ pipeline project back to life have floated around since – the US government expressed its interests in peace with the Taliban.

“It is not impossible that the Taliban will come back to power. They are an element, they’re not going away, and in order to have peace – not necessarily yet prosperity in Afghanistan, they’re going to have to be part of that fabric of society,” says Nancy Soderberg. 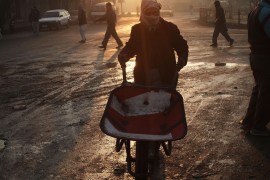