Cambodia has been one of the best performing economies in the world over the past two decades. But there are threats on the horizon, including the UK’s impending exit from the European Union.

The German Development Institute has studied how a no-deal Brexit could affect least developed countries, and it found Cambodians living on the brink of poverty are at risk – that’s if the country’s garment producers lose access to UK markets.

The country’s economy has been largely built on agriculture and textile exports, two sectors it very much relies on. Cambodia’s textile industry is a major supplier to the UK fashion industry and it has favourable entry terms under the EU’s Everything But Arms (EBA) trade scheme, which unilaterally grants duty- and quota-free access to 49 least developed countries – excluding weapons.

As Brexit looms, the country could faces higher export tariffs into the UK – at a time when the EU has started the process of temporarily suspending Cambodia from the EBA due to human rights concerns, as reported by Al Jazeera.

Cambodia’s economy has “never been that healthy … they have few advantages … in textiles, and one of the benefits they had was entry into the European Union through the UK,” explains Reuben Mondejar, professor for Asian Initiatives at IESE Business School, University of Navarra.

The same is true for neighbours Myanmar and Vietnam, but “Cambodia is more particular because they’ll be hit very hard when Brexit goes into effect. All their financial facilitations through the UK would stop. They will have to find a new way.”

Additionally, “Cambodia’s economy has been dependent on China, and now that China’s having a trade war with the US, anything that happens to China will affect them very hard. So, that’s the story for Cambodia until they reform.”

Cambodia ... will be hit very hard when Brexit goes into effect. All their financial facilitations through the UK would stop.

“I am not worried that a decline in economics will mean a decline in the political strength of the current administration … a decline in GDP wouldn’t mean that [Cambodia’s PM] Hun Sen will be removed. He’ll be more entrenched than ever until he decides to leave,” says Mondejar.

“Cambodia will have to find other sources of growth and some ways to employ their people. Agriculture is still strong for them, and has been one of their mainstays. They’ll have to ask for infrastructural help from China in building of roads, and China’s quite generous with Cambodia. So it’s not in the interest of China for Cambodia to slide down economically. It’s one of the loyal states to China.”

After months of political wrangling, Lebanon has announced the formation of a new government. But its economy is screaming for attention and it could be at risk of collapse if some key areas aren’t made into a priority.

Can it fix what some are calling a “zombie” economy – an unsustainable public debt that’s sucking the life out of its finances?

Lebanon is the third most indebted nation in the world and most of it is owned by local banks. Half of the government’s money goes towards servicing its debt, reports economics editor Abid Ali. Meanwhile, youth unemployment is in the double digits, at 17.8 percent. As a result, there up to 14 million Lebanese living abroad sending $7.95bn in remittances. The money they send home makes up a fifth of the overall economy.

Then there’s the war on its borders with Syria, where 1.5 million Syrian refugees seek shelter. Lebanon’s economic problems existed before the war, with one-third of the country living below the poverty line on four dollars a day, according to the UN.

All of this, while the country’s debts continue to be paid.

The international community has pledged $11bn last year to help Lebanon boost its economy, but to access this fund, the new government has to implement tough budget and fiscal reforms and fight corruption.

“Irrespective of the $11bn … Lebanon has to address these reforms because the competitiveness of the Lebanese economy has declined over the recent few years, the investment climate, business environment has deteriorated and that’s very obvious from the global indices … so these reforms were overdue anyway,” explains Nassib Ghobril, chief economist and Head of the Economic Research & Analysis Department at Byblos Bank Group.

“There’s an added incentive to start implementing these reforms to reduce the fiscal deficit, to improve the business environment, to upgrade existing laws, to reduce the operating cost on the private sector with the pledges of $11bn because they’re conditional on those reforms. And there are specific sectoral reforms where the funds will go and finance infrastructure projects that need to be implemented, as well.”

“The priority of this government has to be reducing the borrowing needs of the Lebanese state by shrinking the budget deficit and stimulating growth to increase economic activity since growth has averaged 1.5 percent since 2011,” says Ghobril.

Samsung smartphone: South Korea‘s Samsung has unveiled a new foldable smartphone, as part of its new generation of Galaxy phones. But will it be enough for the industry leader to overcome a shrinking market? Kristen Saloomey reports from New York.

Mosul salon: There are some signs of progress on the streets of Mosul, the city that used to be ISIL‘s self-declared capital in Iraq. The armed group was defeated there more than 18 months ago and people are beginning to return to what’s left of the city. Now, beauty salons that were forced out of business under ISIL are getting a makeover, as Charles Stratford reports from Mosul.

River wars: Plans to dam the Kaliwa river in the mountains of the northern Philippines are being fiercely opposed by tribespeople who live there. The Dumagat people say the reservoir, which the Chinese government is helping pay for, will wash away their home and destroy nature, as Jamela Alindogan reports from the Sierra Madre mountains in Tanay Rizal. 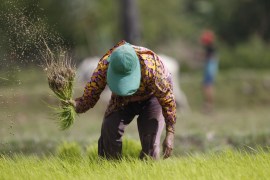 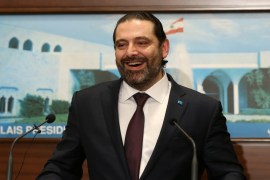