This is the story of fourteen cargo ships accidentally caught up in the June 1967 Arab-Israeli war, and stuck in the Suez Canal while it remained closed for eight years.

While their crews managed to maintain them, their decks became so covered in sand over time that they gradually merged with the landscape and were nicknamed “The Yellow Fleet”. This film tells this unusual story through the eyes of the crews who manned the ships, on and off, for eight years. 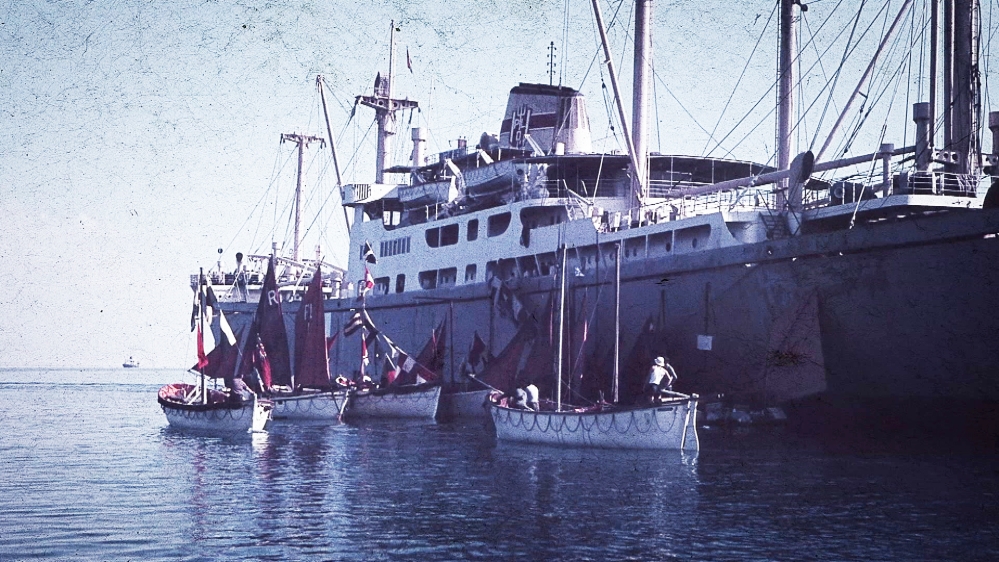 “I had an experience which I will never ever forget. I was 19 years old at the time. And it was quite a surprise to find myself right in the middle of a war, at the front seat, literally,” Peter Richmond, who was on board the Agapenor in 1967, tells Al Jazeera.

When the guns fell silent at the end of the 1967 Arab-Israeli war, Egypt closed the Suez Canal and while passenger ships were allowed to complete their journeys, cargo vessels were forced to remain, drop anchor and simply wait.

Geopolitics and war brought together cargo vessels from the United Kingdom, Germany, Poland, Sweden, France, Czechoslovakia, Bulgaria and the United States into an accidental, international flotilla assembled in a wide section of the Suez Canal known as the Great Bitter Lake. The crews realised that their best option would be to create a spirit of international cooperation, in stark contrast to events in the wider world. So they established a club, the Great Bitter Lake Association, whose remit was to inject some much-needed humour into a difficult situation.

The crews began to devise ingenious ways to make life on board less uncomfortable and established their own unofficial, mini-country, with its own traditions, sporting competitions, and even postage stamps.

They developed a barter system between ships, trading cargos, meat for fruit and prawns for eggs. They even staged their own Olympic Games.

“The idea came mainly from everyone, driven by our desire to do something. We heard about the Olympics so decided we’d do the same on our ships. We had games like weightlifting, high jump, sailing and football. There were prizes and medals for the winners. I kept a silver medal I received for a sailing competition,” Uwe Carstens, former sailor on the Nordwind, says.

In 1975, the Suez Canal was finally reopened but inertia had caused the engines to seize up and all but two ships had to be towed out of the waterway. Both German vessels started on first try, their turbines turning the propellers and setting them on course for Hamburg. In doing so, they set a record for the longest sea shipping voyage in history: Eight years, 3 months and 5 days.

Interview with Mohamed Kenawi, director of Suez: The Yellow Fleet

Al Jazeera: As a filmmaker, what attracted you to this story?

Mohamed Kenawi: Unfortunately, nowadays, we live in a world of conflict and often what gets into the news is war, suffering and pain.

But we need to also remember that human beings are capable of peaceful cooperation, not only in normal, daily life, but also in difficult situations.

Following the stories of the sailors of the Yellow Fleet, who were trapped literally in the middle of a war zone, and how they all decided to cooperate so that they would all survive, is to me a very important lesson. It is a lesson of hope for everyone and I thought this is just a remarkable story and I felt people should know about it.

Al Jazeera: Being stranded on the Suez Canal for a long period of time must have been very boring for the sailors. How did they pass the time?

Kenawi: From a very dangerous place, in the midst of wars and among neighbours from countries hostile to each other because of the Cold War, everyone managed to turn all those negative points into a living, vibrant and cheerful place.

It only happened once everyone had forgotten their own problems, united among themselves and cooperated to live in peace.

Al Jazeera: You met many of the sailors who were there. How do you think the experience shaped their characters?

Mohamed Kenawi: I met several older people but they remembered very well all the details of what happened to them more than 50 years ago. This meant that the experience of the Suez Canal is still stuck in their minds and now they tell the story to their children and grandchildren.

Many of them told me that they have many anecdotes and that they are willing to write a book about those days. I hope it will one day happen.