Editor’s Note: All the information in this film was correct at the time of posting. However, Tarek Momen won the PSA Men’s World Championship in Doha on Friday 15th November 2019. World rankings also vary from time-to-time.

Egyptians top the world at squash. No other country comes close to their recent global dominance and no other sport in Egypt matches the success of squash.

The sport was introduced to Egypt by the British in the 1920s. Amr Bey was an Egyptian diplomat and squash player who won the British Open six times in the 1930s and is generally considered to be the first major, international squash player.

Today, in 2019, seven of the top-ten ranked players are Egyptian, including the world number one. In the last two decades, six Egyptian men and two women have topped the world rankings. Their juniors have won 25 individual titles and Egypt has won 23 team titles across all categories.

International stars Tarek Momen and Raneem El Welily say it is all about hard work from an early age.

“I started playing squash when I was five. It was forced on me. It was the day when my parents came with this racket. I thought it was like a tennis racket but smaller. They said I’d start squash the next day. I was just a kid and knew nothing about squash,” Momen tells Al Jazeera.

He adds: “I wasn’t sure why we played in a closed room and hit the ball at the wall. I trained against my will for almost two years.”

At the time of writing, Momen is ranked number three in the world.

“My parents saw that squash was a sport that Egypt could succeed in locally and abroad. The first time I went to the squash club wasn’t to train but for my brother’s trial lesson. My parents agreed with the coach for my brother to start. I used to watch my brother play after my swimming class. A year later the squash coach asked me to try,” El Welily explains. Now she holds the number one world ranking for squash.

One leading coach suggests Egyptian success is based on breaking the mould, meaning that their players are resourceful, creative, and “attacking”.

Ashraf Hanafi, who has more than 35 years of experience as a player and a coach, tells Al Jazeera: “People ask about the secret of Egyptians getting into the top 10 in the men’s, women’s and junior categories. The secret is a magical mix of many things.”

“They start playing at a very young age and produce strong results.”

But how long can Egyptians stay at the top of squash?

High salaries abroad, especially in the United States, are luring some of their best coaching talent away and many believe this, as well as a lack of funding at home, are threats to Egypt’s dominance. But Momen and El Welily have found more than just playing and financial reward success through squash.

They became friends on the international circuit and got married in 2014, becoming the highest-profile married couple in Egyptian sport. The couple continues to appear in major tournaments around the world.

“A year into marriage she [El Welily] beat Nicole David who was the defending world champion for nine consecutive years. Raneem has become the first Egyptian sportswoman to be world number one,” Momen says.

“That’s a big achievement for us. It’s made me happy.” 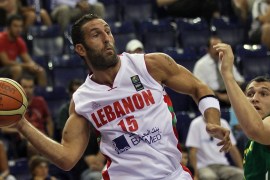 After the civil war, the basketball court became a new battleground of sectarian divisions between Lebanon’s top teams. 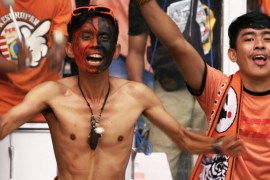