The Palestine National Orchestra (PNO) was first set up in 1936 but was disbanded when Israel was founded in 1948.

In 1993, a group of musicians started a Palestinian national music school in Ramallah that has developed into the Edward Said National Conservatory of Music. It now has branches in Jerusalem, Bethlehem, Nablus and Gaza.

In 2010, the conservatory decided to revive the national orchestra by bringing musicians together from all around the world.

“It took us a year to collect all the names, make calls and get the names and numbers… We created a network, and they came from all over the world,” explains Mohammed Fadel, musician and cofounder of the PNO.

“People from abroad helped us. So did others from the Arab world. They trained our members on how an orchestra works. It was the birth of the first Palestinian orchestra and gathering of musicians.”

The musicians come from different backgrounds but are all equally proud of their Palestinian origins. They’re thrilled to be invited to join the orchestra and moved by the shared experience of bringing quality classical Western and traditional Arab music to their target audience in Israel and the occupied West Bank.

Charlie Bisharat is a professional violinist in California whose Palestinian father and uncles emigrated to the US in 1950. Being part of the orchestra “is a dream for me,” he says.

“I had never had the opportunity to come to Palestine…. I really didn’t know when I would ever have that opportunity. So it was really a great chance to come out and meet people of my heritage and play music with them, and it is a very not-political situation, so it’s really nice because we’re here to spread the word of Palestinian culture and the good side of the culture,” Bisharat says.

For car mechanic-turned-musician Ramadan Khattab, performing in Palestine with other musicians is visceral. “When I perform in Palestine, I have a special feeling that I never have when I perform anywhere else… I believe all the other orchestra members feel the same. If you look at the performers’ faces, you see something that you don’t see somewhere else,” says Khattab.

“When we perform together, our hearts don’t beat out of fear but out of love. And this is different from the others.”

Mariam Tamari, a Palestinian-Japanese classical singer who studied in the US and is now based in Paris, shares Khattab’s feelings. “Singing with the Palestine National Orchestra is quite different because it brings together two of my passions: my identity as a Palestinian and also my identity as a musician,”.

Her father was forced into exile as a young man, but through his connection to Palestine, Tamari was able to retain her link with her father’s homeland.

“All of us feel this sense of very strong identity as a Palestinian, and we have something very specific and very passionate and important to communicate to the world. And this makes the experience unlike any other because already from the first rehearsal, despite the fact that we’ve come from all over the world, we bond immediately like that. We’ve become like family from the first day of rehearsal, and there is an incredible sense of unity and just togetherness that I feel with the Palestine National Orchestra that I think it’s something quite rare,” says Tamari.

Meanwhile, Mohammed Fadel’s efforts have borne fruit. The Palestine National Orchestra has continued to bring Palestinian musicians together to express their love of music and show its power as a unifying force, especially for the Palestinian community.

The award-winning pianist and conductor talks about the power of music and the Palestinian-Israeli conflict. 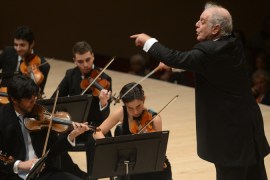 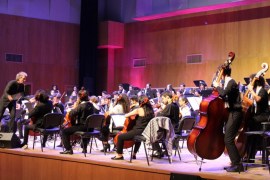