The horror of Typhoon Haiyan is never far from Angela Toliba’s mind.

She was 12 years old when she lost both her parents in the storm; 380km winds and terrifying waves surged into her hometown, Tanauan, on November 8, 2013.

A year on, she lives in a small hut near the shore where emergency workers found her father’s body. “Sometimes when I swim, I feel like I step on hands, feet and fingers in the sand,” she says.

This Saturday marks one year since Haiyan, which was the most powerful typhoon to ever hit the Philippines.

More than 6,000 people were killed, and millions displaced; entire towns were flattened on the central islands of Leyte and Samar.

A year later, many in coastal communities remain in temporary camps where there is no access to jobs or livelihoods; less than one percent of families displaced are living in permanent housing.

Survivors of the storm are angry about poor aid distribution, slow rebuilding and what they say are highly politicised reconstruction efforts. But one town, Tanauan, is successfully overcoming these challenges.

101 East  reporter Drew Ambrose arrived in Tanauan days after the storm and met Angela and other storm victims, like the Labada brothers, and Elmer and Mariano who were searching for their four missing children.

A year later, Ambrose returned to the Philippines to find out how survivors are coping after the storm.

Are you a survivor of Typhoon #Haiyan? Tell us how you coped over the past year @AJ101East

101 East travels to Tanauan, a town in the Philippines hit by Typhoon Haiyan, whose plight has gone largely unreported. 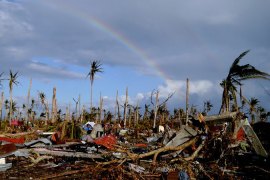 In Pictures: One year after Haiyan

Thousands of families still in limbo as the Philippines struggles to recover from the devastating typhoon. 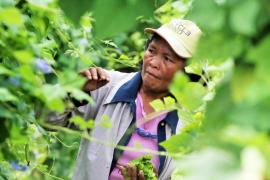 At the centre of the storm: Covering Haiyan

As Typhoon Haiyan struck the Philippines, we look at the media’s role in the aftermath of natural disasters. 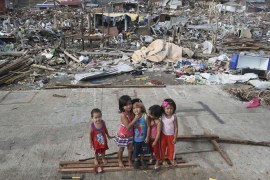