The US economy is facing the prospect of a recession, with the sub-prime credit crunch adding to its problems.

But many analysts are looking to China to pick up the global economic slack.

China’s phenomenal expansion in the last 25 years, with current growth roaring ahead at more than ten per cent annually, has raised hopes that its strength could insulate Asia from the weakening American economy.

That has not been an entirely painless process; inflation on the mainland has been climbing, with many ordinary Chinese suffering as the cost of staple foods and goods soar.

So while for some there is optimism that Asia maybe able to weather the economic storm ahead, others warn that even here the economic picture is cloudy, forecasting lower growth rates and dangerous times ahead not just for China but for the rest of Asia as well.

Watch part one of this episode of 101 East on YouTube

Watch part two of this episode of 101 East on YouTube

Join our debates on the Your Views page 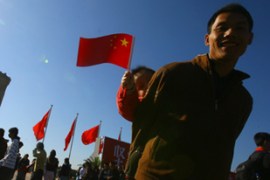 More Americans see China rather than the US as world economic leader, survey says.