In recent weeks, the Indigenous people of Canada and their allies have rallied in support of the Wet’suwet’en First Nation, after the Canadian government and Coastal GasLink Pipeline ignored an eviction notice issued by Wet’suwet’en hereditary chiefs, who are fighting to stop the construction of a pipeline on their traditional territories in northern British Columbia (BC).

The chiefs hold authority over their land and say they were not properly consulted over the 670km (416 miles) Coastal GasLink Pipeline, that would ship natural gas from the north of BC to the coast.

The original people finally have their oppressors’ attention.

But the settler government will not address the intent of the blockades – that Wet’suwet’en sovereign title rights and Indigenous human rights be honoured and respected.

Yet it was not just conservatives attacking Indigenous people. Neoliberals joined in. Prime Minister Justin Trudeau took a confrontational stance, saying rail blockades must “come down now” and claiming the situation was “untenable” even though he had not met the Wet’suwet’en leadership.

It was not long before the mainstream media joined in on the feeding frenzy. Blockades were blamed for hundreds of layoffs, even though CN Rail had already planned to lay off as many as 1,600 rail workers months before the blockades were put in place. Also, some unions reportedly view the blockades as labour actions, like strikes, and respect them as such. Others support them outright. A media release from the National Farmers Union (NFU), whose members depend upon rail transport for their livelihoods, expressed solidarity with the Wet’suwet’en and Indigenous land protectors.

Blockades were also blamed for causing a potential shortage of chlorine, which is used to treat municipal drinking water. Meanwhile, First Nations communities like Grassy Narrows have not had safe drinking water for 50 years, thanks to industrial pollution.

A CN Rail executive even dismissed the victim role that his corporation is being cast in, refusing to revise a 2020 profit guidance as a result of the stoppages, claiming they would weather the blockades just fine.

Also seemingly absent from the mainstream media is the news that behind the scenes, Trudeau had reportedly brokered a deal for CN Rail that allowed it to use Canadian Pacific’s network to reroute freight around blockades to deliver essential goods.

So what is the truth?

While it is obvious that the Indigenous blockades occurring throughout Canada rattled the foundations of the current colonial regime and successfully garnered international interest, it appears that Trudeau and company are exacerbating the effects of the nonviolent direct actions of First Nations done in solidarity with the Wet’suwet’en to push anti-Indigenous propaganda and gather public support for increasingly unpopular fossil fuel extraction projects that are no longer financially lucrative and are quite literally dying on the vine.

Teck Resources Ltd recently cancelled a planned $15.6bn tar sands mine in northern Alberta. The corporation cited uncertainty about Canada’s climate policy, but honestly, going forward with the project would have simply been economically unsound. Trudeau’s administration bought the Trans Mountain Pipeline, and now it looks like that was an unwise investment.

The cost for Trans Mountain has jumped from $7.4bn to $12.6bn. TC Energy (formerly Transcanada) recently announced that they are unsure as to whether they will move forward with completing the $8bn Keystone XL pipeline. Even now, a Crown corporation is considering providing TC Energy with a bailout loan to complete Coastal GasLink, the very pipeline being forced through Wet’suwet’en territory.

The anti-Indigenous language being spouted by settler government leaders and the spread of misinformation, as well as the omission of notable facts regarding the Wet’suwet’en and Indigenous-led blockades and demonstrations, has real consequences.

Indigenous people throughout Canada are now being subjected to violent racist attacks online and in-person and white supremacist vigilantes are now using it to propel their hateful message and target Indigenous people.

Curiously, a common refrain throughout Canada about the Wet’suwet’en and the subsequent solidarity actions is that Indigenous peoples are not following the “rule of law”. Nearly 200 Canadian lawyers and legal academics answered this argument by issuing a statement that declared it is not Wet’suwet’en hereditary chiefs who are breaking the law, it is the settler government of Canada.

In Delgamuukw-Gisdaywa vs the queen, a Canadian High Court acknowledged that the Wet’suwet’en people, represented by its hereditary chiefs, had never surrendered title, maintained jurisdiction over their unceded lands, and that they must consent to any projects that cross their territory. The RCMP also violated the United Nations Declaration on the Rights of Indigenous Peoples (UNDRIP) when it forcibly removed Wet’suwet’en matriarchs from their ancestral lands.

Canada continues to be duplicitous. Wet’suwet’en hereditary chiefs were set to meet the settler government. Government officials pulled out at the last minute.

It is not the Wet’suwet’en or other First Nations who are hurting Canada. It is the settler government and its agents that are inflicting all this damage and expense. As Wet’suwet’en Hereditary Chief Woos stated, “There’s a difference between inconvenience and injustice … Don’t confuse one with the other.”

Trudeau and other Canadian leaders speak of reconciliation, but refuse to honour Indigenous sovereign Title, human rights, and international law. They talk about transitioning away from fossil fuels that cause climate change, but they are still in bed with big oil and use the RCMP to enforce their construction, brutalising Indigenous people and posing unnecessary risks to their land and water in the process.

It is time for the Canadian government and the big oil corporations they are propping up to take accountability for the harm they are inflicting upon First Nations, as well as Canadian citizens.

The Indigenous people of Earth have become the conscience of humanity. In this dire season, it is time to listen to them. 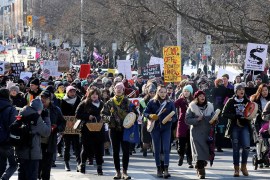 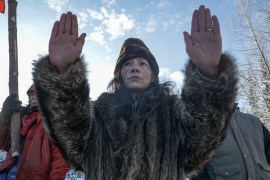 Indigenous people are paying the price for vaccine thieves

As Native peoples self-isolate, outsiders are still demanding in