“This way of life is not primitive, it is not uncivilised,” I gestured to the image on the screen just above my head. It showed my longtime teacher, Dennis Jones, knocking manoomin (wild rice), the grain sacred to Anishinaabe people, into a canoe.

I snapped that photo of us harvesting wild rice years back, before a new pipeline called Line 3 threatened to carry a million barrels of tar sands per day from Alberta through some of the richest wild rice beds in the world, in Anishinaabe territory.

“It is life in balance, life that doesn’t depend on the unspoken, unseen suffering of others for profit,” I said.

A few of the corporate bankers sitting across the table from me shifted in their seats, one raised an eyebrow.

These were the representatives of financiers deeply invested in the expansion and continuing entrenchment of the fossil fuel industry.

We were 30 floors up in a New York skyscraper, the city stretched silently below. My eyes looked past the row of mostly interested faces, to the gleaming water past Manhattan.

“Disconnection is what Westernised society indoctrinates into our hearts, our minds, our bodies,” I told them.

“We’re here in this building of concrete and glass, under these lights. Harvesting wild rice is somewhere else, far away. Just as the tar sands pipeline your company is funding is far away. But concrete is made of stone and water, glass is made of sand, every fibre on your body and your body itself comes from the earth. And the earth is a living, breathing, connected organism.”

The banker at the end of the table nodded almost imperceptibly, their eyes grew softer.

For the past hour or so, the civil society representatives sitting opposite the financiers rattled off the science of climate crisis. Charts, graphs, data tracking the self-destruction of humanity flashed across the screen.

This information was a familiar language to the bankers, easier to fend off and explain away through green energy investments, carbon offsetting, climate policy adoption, the myriad of excuses the financial sector offers to avoid the simple truth of its direct funding of the fossil fuel industry in the face of climate disaster. The wall between us and them was palpable.

But these boardrooms are far less accustomed to indigenous wisdom, to an empathic, values-based assessment of our shared destiny. The impact of indigenous-led campaigns against those funding climate disasters is undeniable.

As the protests against the Dakota Access Pipeline (DAPL) at Standing Rock reached a global audience in 2016 and 2017, so too did the names of the banks funding it.

Many supporters of the struggle asked how they could help from afar. Pulling their money out of the banks funding the disaster was – and still is – an easy point of intervention.

As the Standing Rock water protectors faced increasingly violent conditions in North Dakota, local shutdowns of bank branches by protesters disrupted the flow of business around the United States.

Shutdowns in North Dakota and neighbouring Minnesota spread nationwide, with Seattle’s indigenous-led Mazaska Talks coalition targeting more than 100 banks in a single day at the end of 2017. Meanwhile, the indigenous-led Divest, Invest, Protect programme, supported by the Women’s Earth & Climate Action Network, facilitated meetings between European banks and front-line indigenous women in the years following the bulldozing of the camps at Standing Rock.

Corporate boardrooms are quickly trying to adjust to and counter the swell of indigenous resistance around the globe, particularly on the issue of land protection. As Big Oil has begun to realise that the growing movement against the extractive industry has real teeth, its financial backers have responded in kind.

These days, most of the major banks have climate policies, commitments in writing to invest and operate sustainably. Chase Bank, for example, has committed to sourcing 100 percent of its own power needs from renewable energy by 2020. It is simultaneously the world’s number one funder of fossil fuels. Since 2016, Chase has spent $196bn financing fossil fuels and is the leading banker of fossil fuel expansion.

It appears that hailing the Paris Agreement and slapping photos of wind turbines and setting suns on a company website does not necessarily translate to substantive action.

Indigenous-led resistance against oil infrastructure, mining and extractive industry has a growing base of support; the reverberations of thousands-strong blockades and sage against DAPL, Keystone XL, TransMountain, and Energy East pipelines have reached these air-conditioned, softly carpeted rooms high above city skylines.

Native Americans are not just in textbooks these days, or confined to reservations or the streets of urban centres; we are here in these monied, ostentatious spaces. Indigenous rights policies have started appearing on bank websites – descriptions of the importance of consulting with First Nations, with rights holders.

More of civil society is coming onboard also – indigenous peoples are not just romanticised tokens in a morality framework of inclusivity, but critical components of actually winning this fight for humanity.

“I’ve brought along the data sets, lawsuits, and written material that can convey what I just said in a way that your corporate accountability and risk assessment teams might consider,” I explained, sliding across lawsuits by White Earth Nation, Red Lake Band of Ojibwe, and others against Enbridge’s Line 3 tar sands pipeline proposed through Anishinaabe wild rice beds.

“Tribal consent is clearly not there for this destructive project. Also included are UN reports of human rights abuses that were enacted on unarmed citizens demonstrating against the Dakota Access Pipeline. There’s a security task force already associated with Line 3, readying itself to commit any number of abuses against the citizens of Minnesota.”

My mind flashed to the riot line of law enforcement and private security that had faced us a few months before on a remote dirt road in the woods of northern Minnesota.

“I recognise that my words might appear idealistic, that I do not understand the way of the world, that it cannot change so easily or readily. I wonder, though, when each of you sits here at this table with me, human to human, not banker to consulting party, if you believe humans have truly conquered the earth. If we can live without drinking water. If we are truly civilised when the cost is destruction of our shared home. We’re in rough shape, as a species. I hope to look upon the faces of my grandchildren and tell them I did everything I possibly could to give them a better world.”

The last photo clicked into the frame above us. It was a picture I took fishing with my parents, on the lake my people have lived and died beside for thousands of years, in what is now the watery border between Ontario and Minnesota. The sunset shone on Gojiji-zaaaga’igan (Rainy Lake) and outlined islands of tall pines. Inside, my spirit prepared itself to hear my voice describing what a tar sands spill would do to wild rice, our sacred grain. I thought of how Rainy Lake smells, how the stony island shores warm in the sun. My toes shuffled on the carpet as my nose called up a breeze of shadowy forests across blindingly sunny waves of freshwater stretching for hundreds of miles.

I looked back at the upturned faces, at their sharp suits and tired eyes. Reminding a person of their own fragile humanity, of their debt to unborn generations is not an easy undertaking. But neither is maintaining rigid walls of disconnection from the basic truths of life. All of us are in this, together. 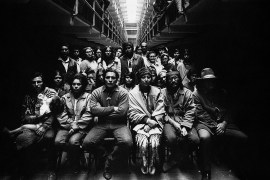 The occupation of Alcatraz was a victory for indigenous people

On 50th anniversary of the takeover of the island, it’s time to recognise how it inspired a global indigenous movement. 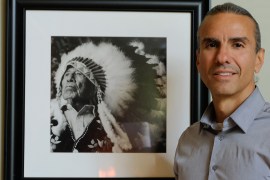 Anton Treuer is part of a movement of indigenous Americans reclaiming the power and authority of their people. 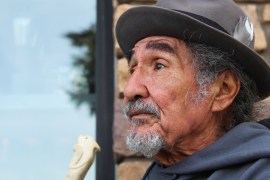 Occupying Alcatraz: The spark that lit the US Red Power movement

Fifty years ago a group of activists set sail to reclaim Alcatraz Island, ushering in a new era of indigenous activism.