In the run-up to the July 29 vote, the now officially dissolved Cambodian National Rescue Party (CNRP) is calling for a boycott of the election. They argue, as do many analysts, that while there are 20 other parties on the ballot, many are linked to the ruling party and there is no viable opposition to Hun Sen‘s ruling Cambodia People’s Party (CPP). As such, it is a foregone conclusion that CPP will “win”. Certainly, the absence of any credible opposition makes a mockery of the election process. But how did we get here? And what happens next for the country?

The CPP has ruled Cambodia for decades. But in recent elections, the opposition Cambodian National Rescue Party (CNRP) had made surprising gains. Gaining more than 40 percent of the vote in parliamentary elections in 2013 and local elections in 2017, the CNRP offered a viable alternative to the ruling party.

In response, Hun Sen has overseen an intense crackdown on the political opposition. This situation was further compounded when Cambodia’s Supreme Court, in November 2017, ordered the dissolution of the CNRP, banning its 188 members from politics for five years. With one decision, which was not open to appeal, the court allowed Cambodia to essentially become a one-party state. As a result, the CNRP not only lost their seats in the National Assembly but many opposition politicians, such as the former leader of the CNRP, Sam Rainsy, and deputy leader Mu Sochua, who fled the country and are now in exile. Opposition leader Kem Sokha remains in jail, charged with treason, and was recently denied bail.

It is clear that this repression was intended to consolidate Hun Sen and the CPP’s leadership and to maintain the political and economic status quo. However, the repression extends far beyond the political opposition. Any dissenting voices are at risk. In the last few years, Hun Sen’s government has unleashed a range of legal actions and restrictions against civil society, journalists and others seen to be critical of his leadership and actions. For example, in September 2017, the Cambodia Daily, an outspoken critic of the ruling party, was presented with a $6.3m tax bill, which resulted in their forced closure. More recently, in May 2018, the Phnom Penh Post was sold to a businessman with alleged links to Hun Sen.

The response of the West

The dissolution of the opposition met strong criticism from the EU. The bloc expressed its concerns about the undermining of democratic rights and warned of economic consequences. In particular, it highlighted that the continued erosion of democratic norms could see the country removed from the Everything But Arms (EBA) agreement, which is designed to help less developed countries export duty-free goods into European markets.

For Cambodia, the EU is its main export destination, accounting for 40 percent of all overall exports. The EBA has had a significant effect on job creation and growth, particularly in the garment sector. A leaked document from the Cambodian Ministry of Economy and Finance, as reported in the Phnom Penh Post, noted the damage that restrictions could cause – up to $676m in tariffs alone.

The EU could use the EBA as leverage to force changes. But the reality is that it would be local workers – of which there are over 600,000 in the garment sector alone – and those who depend on them who would be most affected by any suspension. As such, it is unlikely that the EU would actually take such steps, severely limiting the effectiveness of the EBA as leverage.

Relations with the US will also continue to be strained. The US initially withdrew all funding for the National Election Committee, arguing the 2018 elections could not be free and fair. Most recently, in June 2018, the US Treasury sanctioned Cambodian General Hing Bun Hieng for complicity in serious human rights abuses. This is important because it marks the first time that a Cambodian official has been sanctioned under the US Global Magnitsky Act. And just a few days ago, the House of Representatives passed the Cambodia Democracy Act which, among other things, can impose sanctions and visa bans on Hun Sen, his family and closest allies.

However, it is hard to assess whether these financial actions will have any material influence on Cambodia given the high level of economic support they receive from China.

For China, Cambodia is important for two reasons. Firstly, China has a long-term investment strategy for the country. In the last few years, Chinese investment has started to outstrip US investment – nearly five billion dollar in loans and investments between 2011 and 2015 with the yearly amount ballooning to $200m in 2016 alone, making it the single largest investor in Cambodia. Just last month, China also invested $100m in the Cambodian military, and its “no strings attached” approach suits Hun Sen’s autocratic tendencies.

Secondly, a foothold in Cambodia can be used by China to leverage economic interests for political influence. For example, Cambodia has often resisted signing up to ASEAN statements on the South China Sea which are critical of China’s actions. China’s influence is likely to continue – and grow – particularly as other countries, such as the US, pull away from Cambodia.

But this type of relationship can be a double-edged sword. Hun Sen may want to exercise some caution rather than putting all the country’s economic eggs in China’s basket. Much like Myanmar under the old military junta, there may come a point where it needs to diversify its investments and cutting off ties with Western countries that have previously supported Cambodia may not be a viable long-term strategy.

Cambodia’s government has said about 220 election observers from 52 countries will be on hand to watch for irregularities in Sunday’s vote. But critics say many of the observer groups have ties to the ruling party and their presence will not mean a free and fair election. Interestingly, Japan, which had contributed financially to the election commission and provided “technical” assistance despite the obvious shortcomings in the election process, has decided not to send observers.

What is clear is that Hun Sen’s win will lack credibility. Despite attempts to corral people to vote, there is no masking how deeply flawed the election process has been. With no real viable opposition, there is only one possible outcome.

However, civil society, youth, journalists and others will not necessarily fade away. People will still continue, even in difficult circumstances, to press for a genuine and legitimate say in how their country should work. By dissolving the opposition, silencing his critics and shutting down dissent, Hun Sen may have secured himself another term but he will also have increased the pressure on himself to meet the needs of the people. And as Cambodia deals with economic and social issues, endemic corruption and poor governance, Hun Sen may well have created the conditions for ongoing resistance in the future. 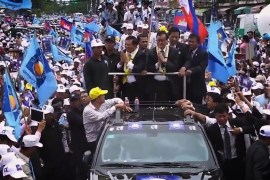