“There are no more villages left, none at all.” The accounts of the systematic ethnic cleansing of Muslims in Myanmar, now effectively ruled by the world renowned Nobel Peace Prize laureate Aung San Suu Kyi, are finally making it to the mainline news these days. “There are no more people left, either. It is all gone.”

The pathological hatred of Muslims ingrained in the leading US and European media (now aggressively replacing the historic anti-Semitism of these societies) scarcely allows them to see or to report the magnitude of the calamity masses of Muslims face at the hands of Myanmar security forces and the Buddhist nationalist vigilante mobs.

Just imagine, for a minute, if it were Jews or Christians, or else the “peaceful Buddhists” who were the subjects of Muslim persecutions. Compare the amount of airtime given to murderous Muslims of ISIL as opposed to the scarcity of news about the murderous Buddhists of Myanmar. Something in the liberal fabric of Euro-American imagination is cancerously callous. It does not see Muslims as complete human beings.

“More than 100 Rohingya Muslims massacred in Rakhine state,” other reports confirm, as the icon of human rights in the West, the sweetheart of every single European and US leader, Ms Suu Kyi has either remained deadly silent on the slaughter of innocent human beings or else dismissed such widely reported facts as “propaganda”.

“I don’t think there is ethnic cleaning going on,” Suu Kyi told the BBC in April. “I think ethnic cleansing is too strong an expression to use for what is happening.” Why so? What word should we use to please Her Majesty’s lexicography of murder and mayhem?

“It is not just a matter of ethnic cleansing as you put it,” she said. “It is a matter of people on different sides of the divide, and this divide we are trying to close up.”

Is this Trumpian charlatanism at work in Myanmar or is it another entirely different kind of Aung San Suu Kyi Newspeak? Hard to tell. But more urgently: Does this shameless power monger deserve to carry the title of a “Nobel Peace Prize laureate?”

“No one told me I was going to be interviewed by a Muslim,” she complained indignantly in 2013, after a BBC reporter questioned her hypocrisy in refusing to address the slaughter of Muslims in Myanmar. The more blatant her hateful racism is and the more evident her implication in the ethnic cleansing of her country, the more the Norwegian Nobel Committee must ask itself about the moral grounding of bestowing any such honour on the next recipient.

Nobel Peace Prize has become something of a global recognition. The fact, however, is that it is a Swedish-Norwegian, or Scandinavian-European, or as they say “Western” recognition force-fed to the world at large. We may agree or disagree with their choices but their choices have become a global marker in science, literature, and peace. They make the decision for the world. We have to live with it.

Today Aung San Suu Kyi must be the single most embarrassing name on the roster of the Nobel Peace Prize recipients.

There are choices they have made that at the time they were made, they may in fact have made some sense – such as Barack Obama (and later you cringe at the very idea of it), and then there are choices they have made that make you reach for your pillow when you heard their name in association with Nobel Prize for the first time: the director of a poisonous gas factory Fritz Haber (1918 – chemistry), the inventor of lobotomy Antonio Egas Moniz (1949 – medicine), the war criminal Henry Kissinger (1973 – peace), or more recently the European Union (2012 – peace).

In the more recent years, however, it is the more egregious case of Aung San Suu Kyi, the Burmese politician, who is now at a head of a state apparatus engaged in mass murder of Muslims that needs urgent attention.

The widely documented slaughter of Muslims in Myanmar and Aung San Suu Kyi’s callous disregard for their fate and even possible political collusion with the mass murderers now leaves no doubt that even if she originally deserved the Nobel Peace Prize, she most certainly no longer does.

Here is the point where the United Nations Human Rights Council, the European Union, the International Criminal Court, Amnesty International, and any other international organisation concerned with human rights should be among the global institutions to put pressure on the Norwegian Nobel Committee to rescind the honour they once bestowed upon such people who are now implicated in gross violation of the very idea of “peace” on which they had awarded this prize in the first place.

The world at large cannot be at the mercy of the Nobel Peace Prize spectacle to bestow such spectacular honour on a person and then wash its hands of the subsequent actions of these people.

To be sure the idea of at least regretting the award of Nobel Prize to certain recipients has perfectly logical foregrounding and precedent. For example, we know for a fact how “Nobel secretary regrets Obama peace prize”. Geir Lundestad is reported to have said: “Awarding the Nobel Peace Prize to US President Barack Obama in 2009 failed to achieve what the committee hoped it would.”

If the idea of the Nobel Peace Prize is to acknowledge and honour those who have contributed significantly towards the realisation of peace, the committee awarding it must stay apace that cause and monitor the behaviour of its awardees to see in what ways they have remained true to it or else diverted from it. Otherwise the whole ceremonial spectacle is an exercise in futility.

The point of this proposal to the Norwegian Nobel Committee is not to single out Aung San Suu Kyi or any other past recipients of the prize for reprimand or rescinding of the prize but to rethink the very logic of the recognition in a manner that makes it more engaging, responsible, and enduring. Today Aung San Suu Kyi must be the single most embarrassing name on the roster of the Nobel Peace Prize recipients. That global embarrassment is necessary but not sufficient. The committee must restore its own credibility and the credibility of the future recipients it will honour by publicly rescinding this prize from a person so blatantly affiliated with genocide.

Dismissing the Nobel Peace Prize altogether as irrelevant or too political or Eurocentric in politics and taste is of course too easy and yet too pessimistic and nihilistic. We only have one world and that is the world in which we live and the urgent task at hand is to see how we can save this world against its own evils with any means at our disposal. The task is therefore to see how the very logic and mechanism of Nobel Peace Prize can be used to save it for a better global mechanism of encouraging peace and denouncing violence. 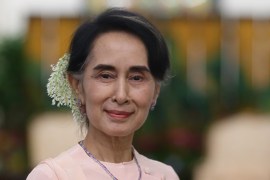 If Myanmar’s leader and democracy icon Aung San Suu Kyi fails to act on the things that lie within her power, then she fails on her own terms.