“This is the new abnormal,” a key adviser of South Korean President Moon Jae-in told me amid North Korea’s latest missile and nuclear tests. Yet, to my surprise, many experts I met in Seoul in recent weeks displayed an uncanny sense of optimism.

Many of them told me they still believe that reunification on the Korean Peninsula is a historical inevitability, though they admitted that no one knows how traumatic or successful it would turn out to be. For some, it could dwarf the absorption costs borne by West Germany after the disruptive reunification with its communist half. While for others it could ameliorate the demographic winter and rising labour costs in post-industrial South Korea.

As for ordinary South Koreans, they seem, on the whole, impeccably resilient and stoically unfazed by the spate of intimidation tactics deployed by their unruly neighbour.

If actual war were to break out, North Korean artillery shells would likely eviscerate Seoul, home to the bulk of the country’s economic output and population. Not to mention, South Korea would have to cede command-and control of its armed forces to the United Nations and the United States.

The ultimate tragedy is that South Korea – the country that could suffer the most in the event of a conflict – is increasingly powerless in shaping its own destiny.

During my visit to the War Memorial in Busan, the southern coastal city that served as the final refuge of retreating allied forces during the Korean War, I thought of the important role Americans played in the fate of the South Korean nation half a century ago.

Back then, the US deployed more than a million troops and suffered the bulk of casualties among the UN forces, who were also under US generals’ command.

Despite the global hysteria over Pyongyang's growing mastery of long-range missiles and, even possibly, thermonuclear weapons, the Moon administration sees North Korea's actions as largely defensive and rational.

Today, however, South Korea’s biggest headache is its former saviour.

This is largely because of the highly bellicose, incoherent, and petulant nature of President Donald Trump’s approach to the Korean crisis. The US president regularly engages in verbal duels with the North Korean regime and its key ally, China. As a result, the world’s superpower has ended up pouring gasoline on fire, making an impossibly explosive situation even more combustible.

North Korea has constantly called Trump’s bluff, undermining his diplomatic capital by openly defying the US president’s threats and taunts.

In a direct rebuff of Trump’s cavalier approach to the crisis, South Korea’s President Moon Jae-in declared in mid-August, “Military action on the Korean Peninsula can only be decided by South Korea, and no one else can decide to take military action without the consent of South Korea”.

This was nothing short of a desperate call for sanity and composure.

The two allies have had difficult conversations in recent weeks, with Trump openly mocking Moon’s call for dialogue. The US president has even threatened to nullify the US-Korea Free Trade Agreement, the bedrock of their economic interface.

A human rights activist born to North Korean parents, President Moon Jae-in is the former protege of ultra-liberal President Roh Moo-hyun, who advocated dialogue and peace on the Peninsula.

In particular, Moon is interested in reviving the “Sunshine Policy” of former President Kim Dae-jung (1998-2003), a Nobel Prize laureate, who met the late North Korean leader Kim Jong-il and oversaw a surreal era of diplomatic engagement between the two neighbours.

Moon seeks a nuclear weapons-free zone in the Korean Peninsula by 2020. This would inevitably entail a final peace agreement and huge infusion of investments and aid into impoverished North Korea. In exchange, as one of Moon’s advisers told me, Seoul will seek the transformation, albeit gradually, of its northern neighbour into a more stable and affable regime.

Despite the global hysteria over Pyongyang’s growing mastery of long-range missiles and, even possibly, thermonuclear weapons, the Moon administration sees North Korea’s actions as largely defensive and rational. After all, the reclusive regime is surrounded by some of the world’s most technologically advanced nations, some of whom are outright hostile.

Meanwhile, North Korea’s traditional allies, Russia and China, are proving increasingly impatient and unreliable. Both powers have signed up to intrusive sanctions against Pyongyang, though strict implementation seems sorely lacking.

In Beijing’s view, its erstwhile ally is proving more of a liability than an asset, but it dreads the prospect of regime change and large-scale refugee crises on its northeastern borders.

The underlying problem is that technically speaking, the Korean War (1950-1953) hasn’t ended yet. All we have is the Korean Armistice Agreement, which is essentially a transient and fragile ceasefire.

Signing a final peace agreement seems the most logical step forward. But the devil is in the details: there will likely be a grand bargain for the terms of such an agreement. And developing inter-continental ballistic missiles and thermonuclear weapons, which can target the US, gives the Kim Jong-un regime a crucial bargaining chip down the road.

As American historian Bruce Cumings perceptively notes, “direct talks” is “the only method that has ever worked”, since it managed to freeze North Korea’s nuclear proliferation and slow down its missile programme for almost eight years (1994-2002). All other methods, from sanctions to regime change and threat of war, either failed or exacerbated the situation. 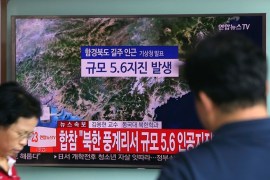