If Africa is the cradle of civilisation, it is also the birthplace of artistic exploration: this continent produced the rhythms and call-and-response that continue to shape the contemporary music landscape. In the 1970s and 1980s, American musicians turned to Africa as pop and jazz underwent a revival; today, Beyonce pays homage to Yoruba deities in her groundbreaking visual albums. Beyond music, Africa imprints itself on modern art, haute couture, dance, and theatre. But despite the pervasiveness of its influence, Africa’s global share of creative industries remains negligible, contributing less than 1 percent (pdf) to the world’s $624bn trade in creative goods. Bringing Africa’s creative industries to the forefront would be a tremendous force for economic development on the continent.

Africa has a long history of creative expression as culture. Nigerians were producing plays well before Shakespeare penned his first drafts and Nollywood’s output of over 1,500 films per year has made it the world’s second-largest film industry.

How can such a prolific and imaginative region reap so few benefits from its creative output? The challenges are manifold. Despite inspiring and being sampled by Western creative minds, creatives on the continent struggle to gain a mainstream international foothold for selling their original work.

In-country and continental promotion of the arts as a product is critical for gaining momentum abroad; the Nigerian government, for example, is funding the construction of six new theatres in Lagos alone. Artists who become renowned in Africa have successfully gained popularity in a broader global audience: singer-songwriter Wizkid found fame in his native Nigeria before his art reached the mainstream through collaborations with American performers Drake and Chris Brown. But even art with widespread appeal, such as the burgeoning Afrobeats scene, is stifled as profits go to pirates instead of artists.

In South Africa, for example, it is estimated that 44 percent of DVD profits are lost to piracy. For creative industries to thrive on the continent, strong intellectual property laws will need to be put in place and enforced: art merits protection against threats just as mines and oil pipelines do.

If Africa can position itself as a global centre for creative arts, individual creatives and entire economies will prosper.

Writer Oscar Wilde claimed that “when bankers get together for dinner, they discuss art”. Many artists find it difficult, however, to present creative work as a saleable product. But, given the obvious interest in African artistic expression, the solution to making a booming business of African creativity lies in monetization and market creation.

In the West, the options for paid subscriptions to creative content abound with Hulu and YouTube providing targeted exposure and generating profits; Africa boasts irokotv, the Netflix of Nollywood films, and Kenya’s Buni+ streaming service. On a continent with only 1,000 cinemas (or one cinema per million people), however, the development of more such platforms for African creatives could be groundbreaking. Africa also needs its own versions of Fiverr, which matches creatives to gigs, and Patreon, which turns fans into patrons who finance the creative process. Art itself may be low-tech, but self-sustaining artists will need a strong digital presence to become bona fide businesses.

Africa has no shortage of talent, and the economic potential economic of fostering Africa’s creative industries is immense. Now is the time to recognise and profit from the vital role that the creative industry plays in job creation and national pride. Nollywood, Nigeria’s second-largest employer, has created over a million jobs and generates over $500m annually; what would happen if the same held true for visual arts, theatre, and dance?

India’s Bollywood film industry contributed some $2.3bn to India’s gross domestic product (GDP) in 2016 and helped India secure its place among the BRIC countries. With Africa’s population expected to double by 2050, a flourishing creative sector could be instrumental in addressing regional unemployment. Furthermore, although tourism accounts for an estimated 9 percent of Africa’s GDP, Africa’s creative and cultural soft power could further boost demand for travel to the continent. Art is a forum to heal divides and realise shared experience across diverse populations.

Music and film are often the first interactions one has with new countries and cultures: consider how the world became enamoured with the US through Hollywood’s depiction of the American Dream. If Africa can promote its stars on the global stage, it can change Africa’s image to reveal a continent of innovators who give to the world. This reclaiming of identity and destiny could be an immeasurable source of esteem, community cohesion, and political stability.

When Africa commits to bringing the creative sector to life, African art can breathe new life into the continent. Andy Warhol once famously said that “making money is art and working is art and good business is the best art”. If Africa can position itself as a global centre for creative arts, individual creatives and entire economies will prosper.

Bolanle Austen-Peters is the founder of Terra Kulture, a leading art, culture, lifestyle, and educational centre in Nigeria.

Technology is the new border enforcer, and it discriminates 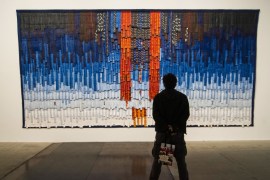 Black presences at the Venice Biennale

African art might not have had the money to book fancy pavilions but it left a powerful mark on the Venice Biennale. 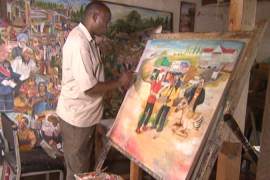