We are indeed in hurricane season. This time it is the president who is blowing his whirlwind Trumpcane to the NFL by calling protest-kneelers “sons of bitches” and suggesting that they should be fired and that there should be a boycott of the NFL if the owners do not “fire or suspend” offending players.

And now he has withdrawn the White House invitation to the “hesitating” Stephen Curry of the NBA’s Golden State Warriors.

This is exactly the kind of behaviour from Trump that I forecasted in my recent piece, “Five reasons to like President Donald Trump” (aka “Trumpty Dumpty sat on US all”). And when you mix American sports, capitalism, white supremacy and black protest together, you are headed for nuclear social reset. So get your popcorn, favourite beer and fire extinguisher ready, because things are going to get very hot as we head to Super Bowl 2018.

American sports is a billion-dollar industry, a national pastime where communities are formed and reinforced by the nature of physical competition. From little leagues to college ball to baseball to boxing, and even to old men golfing, this nation loves its sports – more than healthcare, education and social justice. Winning high school sports programmes are the crown jewels of many communities – where sometimes literacy and graduation rates are embarrassing.

College sports, for example, define not only alumni identity and endowment-giving, but polarise millions of folks who haven’t even been to college. College coaches are gods, often making a higher salary than the presidents who hire them. People bet on sports, create fantasy leagues and date and divorce around the culture of sports.

The mega-multitude of sports bars and arenas across the US should be more than enough evidence to show how enmeshed sports are in American culture. Detroit has one of the worst housing situations in the country, but it also has three professional sports stadiums. This addiction to sports is more powerful than crack, crystal meth and fidget spinners. And don’t even get me started about the grip that sneakers and sports-clothing culture has and had over the youth of today, yesterday and yester-yesterday. And when you add alcohol to sports spectatorship, as many fans do, you just might get all the elements for folks to reveal how they really feel and think, plus some added violence.

call kneelers ‘sons of bitches’ but say that some of the folks on the side of the KKK and Neo-Confederates are ‘good people’?”]

However to be fair – and interestingly enough – sports have also been the place to make the biggest statements about the myth of group supremacy and the hope for social equality.

We saw this with Jesse Owens in the 1936 Olympics. I am sure Hitler was pissed that a black man outran his supposedly superior Aryans and while white America (the racist ones, too) rejoiced in victory, black America basked in redemption and collective pride. Jackie Robinson’s role in the integration of baseball changed American sports forever, while Billie Jean beating Bobby Riggs in tennis was a victory for both women in tennis and feminism. And off the playing field, the great Muhammad Ali gave America its most stunning knockout punch when he showed our nation that integrity and moral consciousness are more important than championship titles.

Many sports heroes have done plenty to advance social and political issues both then and now. The question is whether we are doing enough to support their actions, not after the fact or decades later, but in the moment of need. Maybe we should ask Tommie Smith and John Carlos, the black Olympic medalists who raised their black-gloved fists in the name of protest almost 50 years ago, only to be met afterwards with instant rejection. Also, we should ask Colin Kaepernick.

We like (American) football. Hail Mary passes for last-second touchdowns, fumbles, fourth down and two inches, out-of-nowhere interceptions and running backs who defy the laws of physics are all the things that parallel the ups and downs of life. We are all looking for that touchdown. Plus, the Super Bowl is the most watched event in the world featuring halftime performances from pop stars and the introduction of new, witty, clever advertisements.

So last season when Colin Kaepernick (San Francisco) took a knee during the national anthem to make a statement about police brutality against black and brown men, he created a national stir. This was a bold and courageous move, given that about 70 percent of NFL players are black men, while 83 percent of the fans are white (64 percent white men) and almost all of the owners are white.

His protest seems to have cost him his job, since he is still unsigned even when less-skilled quarterbacks have been picked up, which raises the question of whether or not he has been penalised for protest behaviour. Meanwhile, the NFL Players Association named Kaepernick an MVP for his philanthropy and activism, and countless other NFL players, athletes from other sports and celebrities have made statements of support. But still no job. And it is unclear how the owners think they can get away with this without a serious backlash.

And why, and forgive me for asking, are we playing the national anthem at sports games anyway? So we can fake sing words we don’t know? Shouldn’t there be a separation between sports and state, like there is between church and state?

Nevertheless, after his Alabama speech President Trump where he chimed in on all of this, he added fuel to fire with this tweet:

If NFL fans refuse to go to games until players stop disrespecting our Flag & Country, you will see change take place fast. Fire or suspend!

The president has put himself in a bind. How can he call NFL kneelers “sons of bitches” but say that some of the folks on the side of the KKK and Neo-Confederates are “good people”?

He has also put the NFL owners in a bind. If they come down on kneeling players and force patriotic gesturing, they will face increasing protests from the Black Lives Matter movement and supporters, and if they protect freedom of speech for their player and hire Colin back they will face a boycott led by the president. Either way, now, the Super Bowl brand has become a football headed for a historic explosion, caught between a kneeling protesting player and a tweeting psycho-patriotic president.

“The NFL and our players are at our best when we help create a sense of unity in our country and our culture. There is no better example than the amazing response from our clubs and players to the terrible natural disasters we’ve experienced over the last month. Divisive comments like these demonstrate an unfortunate lack of respect for the NFL, our great game and all of our players, and a failure to understand the overwhelming force for good our clubs and players represent in our communities.”

Trump’s comments seem to have backfired and sparked widespread kneeling and the locking of arms between players and even with some owners. The Pittsburgh Steelers head coach ordered his players to stay in the locker room during the anthem. All did, except one player who was a veteran. The Tennessee Titans and Seattle Seahawks were also absent for the anthem.

A number of Trump-supporting owners offered statements supporting the players while being very critical of President Trump. Robert K Kraft, friend and campaign donor of Trump and owner of the New England Patriots, one of the more conservative teams in the league, released the following statement through their website:

“I am deeply disappointed by the tone of the comments made by the President on Friday. I am proud to be associated with so many players who make such tremendous contributions in positively impacting our communities. Their efforts, both on and off the field, help bring people together and make our community stronger. There is no greater unifier in this country than sports, and unfortunately, nothing more divisive than politics. I think our political leaders could learn a lot from the lessons of teamwork and the importance of working together toward a common goal. Our players are intelligent, thoughtful and care deeply about our community and I support their right to peacefully affect social change and raise awareness in a manner that they feel is most impactful.”

Not every NFL owner closed ranks against Trumps, Jerry Jones, owner of the Cowboys, has gone on record stating that he does not believe that political statements should be made during the anthem.

While I appreciate the newly found lovefest between players and owners, let us not forget why Kaepernick got on a knee in the first place. Let us not forget the hurricane of police brutality ravishing black communities all across America. Or that Kaepernick’s “amazing response” demonstrated “an unfortunate lack of respect for the NFL”. Well, this “overwhelming force for good” might be debatable, when you factor in the rejection of Colin Kaepernick and add in the powerful optics of white supremacy – black men running up and down the field making their white owners richer or the racist mascot on the helmet of the Washington Redskins, in our nation’s capital no less – it becomes a shameful sight. And perhaps most troubling is the catastrophic effect of concussions on players’ post-career lives.

Is this sport (along with boxing) scrambling these athletes brains? Research suggests, “yes”. Most recently, it has been revealed that the former New England tight end Aaron Hernadez, who was convicted of murder and later killed himself in prison, had a severe case of the degenerative brain disease chronic traumatic encephalopathy (CTE), due to repeated head trauma. This makes me wonder if the game is turning these players into madmen.

In any case, these issues must be addressed immediately.

In closing, I have the following messages for our key players:

To President Trump, aka Trumpty Dumpty, who may have invertedly politicised more players and owners and gotten Colin Kaepernick his job back in the near future, I ask that he refrain from the use of “sons of bitches”. This is not presidential.

To the NFL and team owners who might want to use Trump’s “fire and suspend” order as a pretext to cosy up to the players and avoid the consequences of blacklisting a valuable player, I remind them that there is no way out for them unless they get Colin Kaepernick back to work. If he is not hired, there will be calls for a continued boycott against the NFL and its glorious Super Bowl, putting the NFL at risk of taking two knees, a tackle and concussion of its own.

To the black and brown communities – who have suffered the most from police brutality, from whom Kaepernick spoke up, I say our support is a requirement, not an option, if we are to succeed. And for all the supporters of social justice, we cannot turn our backs on the ones that speak up when the world is watching. We cannot allow what happened to Tommie Smith and John Carlos in 1968 happen to Colin Kaepernick, for if we do, we have learned nothing about the power of solidarity, support and community. We must stand behind the soldiers of justice.

To Colin Kaepernick. You are not alone. Thank you for your service!

Editor’s note: A previous version of this text mistakenly had the year of the Olympic games in which Jesse Owens ran as 1933. It was 1936.

John Sims, a Detroit native, is a multi-media artist, writer, producer and creator of Recoloration Proclamation, a 16-year multimedia project featuring a series of Confederate flags installations, The AfroDixieRemixes, the annual Burn and Bury Confederate Flag Memorial Day ritual and a forthcoming memoir. 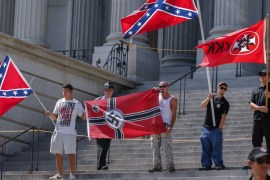 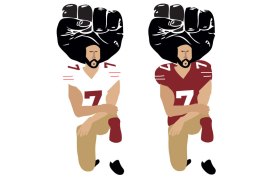 Sudanese political cartoonist speaks about the story behind an illustration of the NFL quarterback that has gone viral.