The hurricane season here in Haiti runs from June to November. There are still two months to go. We keep checking the latest data from the US National Oceanic and Atmospheric Administration as it predicts more hurricanes. We’ve already had Harvey, Irma, Jose, Katia and Lee, now Maria. The World Meteorological Association has a list of names ready for those that could come next: Nate, Ophelia, Philippe, Rina, Sean, Tammy, Vince, Whitney. And so we prepare.

Scientists say this season is unusual for having two Category 4 and two maximum Category 5 hurricanes in a single month.

In October last year, Category 5 Matthew hit more than a million people in south-east Haiti. This year, another Category 5 – Irma – threatened northern Haiti after having all but destroyed some of the smaller Caribbean islands. But Irma skirted Haiti and, as if reminding itself of its destructive sense of purpose, hit Cuba instead, devastating housing, infrastructure and agriculture, and rebounding into Florida.

In Haiti’s northern municipalities, Oxfam, Unicef and the local health ministry run a “fire-fighter” cholera elimination programme. Cholera is like wildfire. Oxfam teams work to isolate the case, set up a sanitary cordon, and then seek the source and treat the water. “The programme is finally achieving success,” says Laurence Desvignes, who coordinates the programme. “Zero cases here since July, and now just ten cases a week in the north, down from hundreds each week at the peak of the epidemic.”

There was a lot of cholera in the United States back in the 1800s. People become stricken with diarrhoea and dehydration. It’s a killer. Modern water and sewage treatments can stop it. The solution is not a mystery but it is incredibly difficult in Haiti because it has such poor water and sanitation. “If the hurricane had hit us hard it could have ignited another epidemic very easily,” says Desvignes.

Climate change is changing the game for us. Warmer Atlantic waters are super-charging these storms, making them more frequent and intense. Caribbean island nations are terribly exposed on the front line.

Many people turn to religion, “the sigh of the oppressed creature, the heart of a heartless world, and the soul of soulless conditions …the opium of the people”. That might help give comfort but isn’t going to fix the problem. Climate change needs us to rethink, globally and locally. We need a new direction for public and private investment.

One immediate task is to spend more on getting people prepared. That means developing expert local humanitarian capacity, leading to better contingency planning, risk mitigation, education and awareness. This must involve vulnerable communities. We already have policies and often even laws. But there’s a big gap in acting upon them – and a stunning absence of political will. Everywhere.

The Inter-American Development Bank’s new Risk Management Index measures countries’ capacity to reduce risk, recover from disaster and provide financial protection. Every country measured in this region has failed to reach even a satisfactory level.

But what really causes the “disaster” is not wind or rain … its economic inequality. Haiti is less than 500 miles from Florida but may as well be on another planet. Haiti’s once prosperous rice production, its principal economic activity, has long-since collapsed after tariffs were stripped from 50 percent to 3 percent and subsidised US rice was able to be dumped onto its market. There are few jobs in Haiti, no social protection, safety nets or insurances. Haiti’s social and economic situation is one of the hemisphere’s biggest collective failures.

This is why we end up fire-fighting cholera after a hurricane in Haiti.

This week – even as Hurricane Irma spared it – violence erupted on the streets of Port au Prince. Police sprayed tear gas at people. The spark was a new budget, approved by parliament on the eve of Irma, that voted in a 74 percent increase in salaries and benefits to members of parliament alongside new taxes on consumption that will hit the pockets of the poorest.

That is a preparatory measure to guarantee a disaster.

Simon Ticehurst is the Oxfam Regional Director for Latin America and Caribbean. 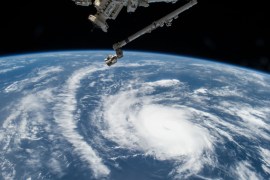 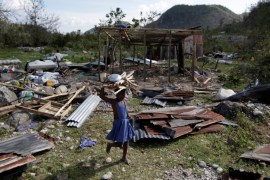 Severe storms have different effects on rich and poor countries.