Today marks the third anniversary of the Houthi militias’ capture of Sanaa, Yemen’s capital city – a significant milestone in Yemen’s descent into a failed state. This anniversary takes place just five days before Yemen’s celebration of the September 26 revolution that, ironically, ended the rule of the traditional Imamate that the Houthis are now desperately trying to restore.

The Houthis’ vast military expansions of 2014 and 2015 were accomplished only with significant help from former President Ali Abdullah Saleh and his loyalists in Yemen’s military institutions. Military conflict and profound levels of political mistrust have shaped Saleh’s relationship with the Houthis for years. However, after being ousted from power as a result of widespread protests in 2011, Saleh successfully formed an unholy alliance with the Houthis. The main objective of this alliance was to undermine the transition of power in the country following the election of Abd-Rabbu Mansour Hadi as president in early 2012.

Saleh’s alliance with the Houthis was a secretive pact in the beginning, but it was fully exposed after the start of the Saudi-led war on March 26, 2015. Now, this alliance is part of a de-facto coalition government in Sanaa. Nonetheless, this alliance is at best a political marriage of convenience rather than love, with inherent political contradictions that far exceed Saleh and the Houthis current shared goal of defeating the Saudi-led coalition.

It would be a mistake, however, to think that dire humanitarian crises such as the cholera outbreak or the deterioration of economic conditions with hundreds of thousands of Sanaa government employees and retirees not receiving full salaries for several months are having any impact on the Saleh-Houthi alliance. None of these factors really matter to either political group.

Nevertheless, the Saleh-Houthi alliance is breakable and it will be the Houthis who decide the right time to disengage themselves from Saleh. Taking a page from Saleh’s book of political cunning and manipulation, the Houthis view their alliance with the former president as a means to control government, military, financial, and judiciary institutions. The Houthis are closer than ever to achieving that goal and are now so politically emboldened that they are campaigning publicly for Abd al-Malik al-Houthi’s right to rule Yemen based on the theory of Wilayat Al-Faqih, the legitimate right of a Muslim Jurist to rule.

Many are puzzled by Saleh's unusual patience toward the Houthis' political provocations, although it is now obvious that he is without any reliable internal or external political allies.

The Houthis have recently erected billboards on the streets of Sanaa depicting the Houthi leader and advocating his right to rule. This followed controversial changes to the Yemeni school curriculum promoting the Houthi ideology. Through these political moves, the Houthis seem determined to at least monopolise control of North Yemen. Thus, the current escalation between Saleh and the Houthis should not be viewed as an isolated event, but as part of the Houthis’ carefully calculated political plan to eliminate Saleh with the lowest possible cost.

Less than one week before Saleh’s celebration of the 35th anniversary of the establishment of the General People’s Congress (GPC) on August 24, 2017, Khalid al-Radhi – a prominent Saleh loyalist – was gunned down by Houthi guards at a newly erected checkpoint a few miles from Saleh’s residence.

It was later revealed that the primary target of this incident was actually Saleh’s own son, who managed to escape from the Houthi guards. Furthermore, the Houthis made new high government appointments on September 12, 2017, including a new chief justice. Despite a high-level meeting between Saleh and Abd al-Malik al-Houthi via closed-video conference the next day to address rising tension between the two sides, the Houthis have continued to expand their political control and efforts to silence the opposition. The recent arrest of some journalists and the declaration that opposition media will not be tolerated is an indication that the Houthis are gradually implementing a state of emergency in their controlled areas, which their partner – the GPC – has previously opposed.

Many are puzzled by Saleh’s unusual patience towards the Houthis’ political provocations, although it is now obvious that he is without any reliable internal or external political allies. Saudi Arabia has burned most of its bridges with Saleh since the beginning of the Operation “Decisive Storm” in March 2015. Unlike Saleh, the Houthis enjoy the support of a key regional actor, Iran. Moreover, Saleh has lost the support of his significant military, tribal, and political allies such as Sheikh Abd Allah al-Ahmar’s family, General Ali Mohsen al-Ahmar, and the Islah Party. His inner circle is now filled with young and non-savvy politicians and despite his own self-claimed political glory, Saleh has never fought a war alone and has always relied on his tribal and military allies to fight his battles. The Houthis have never fully trusted Saleh and will never forget the pain he caused them in the past. They understand Saleh’s growing political vulnerability and, thus, will continue to exploit it.

Saleh – who once described his way of ruling Yemen as “dancing over the heads of snakes” – appears to be in his last round of dancing. The Houthis are closer than ever to abolishing his residual power unless Saleh can pull off one of his old political tricks and somehow reach out to the Saudi-led coalition to end his alliance with the Houthis and save his political life. Regardless of the outcome of the current political tensions between Saleh and the Houthis, the situation in Yemen will continue to grow increasingly complicated.

Gamal Gasim, associate professor of Middle East Studies and political science at Grand Valley State University, earned his PhD in political science from Texas Tech. Before Grand Valley, he taught at Texas Tech, University of Wisconsin-Madison during the summers of 2006 and 2007, and at the University of Illinois at Urbana-Champaign and Beloit College during the summers of 2008 and 2009 respectively. His research interests include comparative politics, Middle East politics, Islamic civilization, Islamic political parties and Muslim Americans. He has contributed articles to Islam and Christian–Muslim Relations, Studies in Ethnicity and Nationalism, Politics & Religion, Electoral Studies, the Journal of Political Science Education, the Journal of Islamic Perspective and Culture, the Oxford Encyclopedia of Islam and Politics and other journals. He also writes for Al Jazeera English, the Arab Daily News, Huffington Post, and Yemen Times. 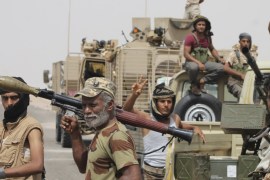 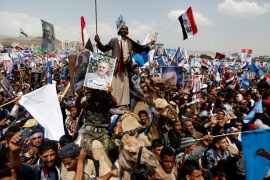 Hundreds of thousands rally in a public show of support for ex-president amid tension between his loyalists and Houthis.