There’s a playbook for committing atrocities and being absolved of them. It wasn’t written by George W Bush, now a retired painter of dogs in the US state of Texas, but it was popularised and legitimised by his administration at the dawn of the 21st century. And the world today, with its multiple bloody wars on terror fought by allies and foes of Washington alike, sometimes begrudgingly together, reflects this bequeathment.

Terrorism is a useful foe. Wars against it need not be declared, and combatants need not be defined. Traditional warfare, with a uniformed opponent, brings with it the not always avoidable bureaucracy of international law; lawyers saying you can’t shoot this or that. No conflict is outside the law, at least on paper. However, an amorphous tactic can’t file a petition at The Hague, and when every power of note is on the same page with respect to the need to kill shadowy non-state actors, extrajudicially, it’s smart statecraft to adopt the rubric of the war on terror, with modern flourishes.

“Fake news”. That’s the new line in 2017, deployed by Nobel laureate and leader of Myanmar Aung San Suu Kyi on September 6 to characterise reports of mass murder against the Rohingya people, a mostly Muslim ethnic minority considered unworthy of legal rights by her government. Nearly a quarter-million people have fled largely Buddhist Myanmar in the last year, over half in the last two weeks following a crackdown by security forces engaged in a claimed war against Islamic terror.

Thousands have been killed, with refugees and journalists on the ground reporting horrific scenes: mobs and Myanmar’s armed forces burning down Rohingya villages, those who aren’t killed driven away by the tens of thousands to Bangladesh, another country whose government doesn’t want them, and only then if they can get by the landmines placed along the border by the military that’s exterminating them.

These accounts are widespread, but those who wish to defend the perpetrators of such acts are savvy: they don’t defend them, but rather dwell on the typos they find in a war crimes indictment. That means reserving the thrust of one’s anger for those who circulate misinformation, a problem during any conflict – apologists for the Khmer Rouge, some still active today, indicted the mainstream narrative about mass death in revolutionary Cambodia by noting The Washington Post’s publication of fake photos – but one made all the easier in an unverifiable age of instantaneity.

Aung San Suu Kyi blamed “terrorists” for sharing those photos today. It’s “simply the tip of the iceberg of misinformation,” she said in a Facebook post, “with the aim of promoting the interests of terrorists,” an unsurprising goal for misinforming terrorists. The dull math of a war on a terror (them vs us = whose side are you on?) does not allow for much artistic freelancing, so redundancy may be excused.

Russian state media, representing a government that sells arms to Myanmar, appears to just be repeating stock footage. According to Sputnik and RT, George Soros, the billionaire financier, is the wealthy Jew behind this new war, apparently in search of another bloody pipeline – mirroring the conspiratorial explanation for revolution-turned-war in Syria. On Global Research, a pro-Russia Infowars for a conspiracy-mongering left, one may read that “Saudi jihadists” are behind the crisis.

There's always a fight over what constitutes terrorism and who is a terrorist, but by framing their internal conflicts as a war on terror, one makes a familiar appeal to a built-in audience.

Bush, likewise, blamed everything but his own actions for the insurgency in Iraq. “No act of ours invited the rage of the killers,” he told the National Endowment for Democracy in 2005. Rather, “Islamic radicalism,” he said during the height of attacks on US troops, is enabled by “allies of convenience like Syria and Iran that share the goal of hurting America,” and “use terrorist propaganda” to magnify the impact of their support.

In that, Bush wasn’t all wrong: Syria did indeed facilitate the transit of jihadists to Iraq. That led the Bush administration to send terror suspects to Damascus, where they were dutifully tortured, even as the US president admonished the regime of Bashar al-Assad. Iran, too, aided Iraqi insurgents, but neither government created the insurgency: the 2003 invasion and subsequent occupation did that. Now, today, both Tehran and Damascus echo the war on terror rhetoric of old, blaming the insurgency in Syria on outside actors – in the case of Iran, actors other than themselves – while denying any agency or cause to those fighting them.

Part of it is there are only so many forms that apologism for war crimes can take; the practice necessitates imitation and repetition. A cartoon that originates in Israel, depicting an Israeli soldier protecting a mother while an armed Palestinian hides behind one, has been repurposed by those who preach resistance to Israeli aggression, shared by partisans of Syria’s Assad as well as Egypt’s Sisi, both of whom are waging self-styled wars on terror in need of excuses for civilian deaths. On Twitter, where hearts and minds are now won, a similar cartoon has been rolled out by supporters of Myanmar’s genocidal military.

These supporters are echoing governments whose intent is not just to justify, to their own choir, but to attract new and more powerful support – from other states. Assad, for example, has made resistance to US imperialism key to his brand, blaming it for the insurgency that developed after he tried to bomb and torture his way out of reform. But asked about his own support for the “so-called American war on terrorism” under Bush, when “Syria used to help the CIA in the rendition programme and interrogating and torturing people,” he didn’t even challenge the terminology.

There’s always a fight over what constitutes terrorism and who is a terrorist, but by framing their internal conflicts as a war on terror, one makes a familiar appeal to a built-in audience. Mentioning “Islamists” and its variants triggers a Pavlovian alt-morality: the mass murder happens in the context of a recognisable, civilisational struggle, enabling greater acceptance of casualty counts while increasing the chance of killing, cooperatively, alongside the globe’s leading powers. When the US government finally made good on a threat to bomb Syria, those bombs fell on just about everyone but the regime and its allies, friendly fire and a bruised runway aside.

As US President Donald Trump, asked about the Assad regime’s repeated use of chemical weapons, explained at a September 7 press conference, “We have very little to do with Syria, other than killing ISIS.” While the regime is responsible for the majority of civilian dead, “What we do is kill ISIS,” which, of course, means killing more civilians still.

A war on extremism can’t be won on propaganda and military might alone – an insurgency, defeated, is often resurrected, more extremely, when the grievances it exploits aren’t remedied. But the war on terror logic and rhetoric spreads with the imprimatur of the US and its official enemies, confusing those whose politics are based on reflexive and binary opposition to one or the other. It spreads in part because states that commit acts of state terrorism can exploit an international system which values the sovereign right of states to terrorise much more than people and their rights.

Every terroriser with a seat at the UN has learned the tune, and the wars keep humming along. Bush’s regime change in Iraq gave rise to the forces and political dynamics that would make stability and a regime’s preservation the overriding concern of left, right and centre. As hundreds of thousands of dead civilians and thousands more living through war crimes can attest, from Yemen to Syria and Iraq to Myanmar, the “war on terror” has won.

Charles Davis is a writer currently based in Los Angeles. 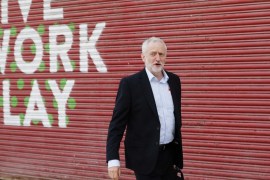 Corbyn: We have to admit ‘war on terror’ is not working 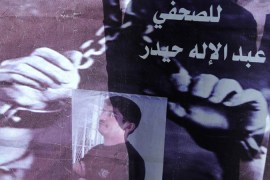 The dangers of reporting the ‘war on terror’

We look at Obama’s role in the continued imprisonment of a Yemeni journalist and the issues behind it.

How a Bernie Sanders resolution is normalising the war on terror

War was ‘devastating to America’ – and Iraq

To the right and centre-right, Chelsea Manning is an LGBTraitor

Sharing science is a crime