Fresh-faced doesn’t even begin to describe Simon Muturi. He’s a 24-year-old small businessman from Nyeri County, the heartland of incumbent Kenyan President Uhuru Kenyatta. He’s also the nominated candidate for his ward, under Kenyatta’s Jubilee Party. Simon, or “roho-safi” (clean-hearted) as his supporters like to call him, is not your typical candidate. He is young, has no political connections or clout to shake a stick at, and he campaigns on a bicycle. He turned his bicycle into a campaign gimmick to better identify with the ordinary voter, but also it’s all he can afford.

What’s even more endearing about Simon’s story is that in a region where securing his party’s nomination more or less means that he will be his ward’s next representative, he managed to beat a field of candidates who are richer, better connected, and far more politically experienced than him to get the nomination. Double his age, and he’d still be the youngest contender.

So how did a greenhorn beat the field? Maybe his success had something to do with the fact that 50 percent of the electorate in his ward are young people between the ages of 18 and 35. Every other candidate for the seat is over 50, so his success was not a surprise when you look at it that way.

In fact, if you look at Kenya’s national voter register statistics, you’ll find that young voters below the age of 35 constitute 51 percent of the entire electorate. So this election, if only just, qualifies as a young persons’ election. The more energetic, more exuberant half of the population now statistically has the upper hand, which matters a lot. Simon’s success shows that the Kenyan youth is ready to get behind a younger candidate.

But the national race is still being led by older politicians and old politics that do not necessarily reflect the will of the young electorate.

Old candidates in a young election

Opinion polls released on the race so far put President Kenyatta, aged 55, ahead with 47 percent of the vote, and his closest challenger, opposition stalwart Raila Odinga, who is 72, at 42 percent. So neither candidate has enough votes to pass Kenya’s constitutional threshold of 50 percent to secure a victory.  According to the polls, 3 percent of registered voters are not planning to take part in the forthcoming election and 8 percent are still undecided. It is likely that these undecided voters are young people and they will be the ones determining Kenya’s next president – if they eventually decide to vote for one of the main contenders.

In a country where 80 percent of the population is aged below 35, just 13 percent of those running for various offices are in that age band. That tells you something about the paternalistic politics that Kenya is struggling to break away from. Neither one of the country’s main political formations even considered having a young person as part of their senior-most leadership. Young people have no stake in the country’s national politics and they are rapidly losing interest.

Both main presidential candidates say that their agenda is to unlock the potential of the youth in Kenya, but every time they voice these sentiments, their statements ring hollow. Overall, what these politicians are selling is nothing more than a slapstick version of the young Kenyan’s identity and needs.

Unfortunately, the reality is far grimmer.

Neither candidate has the mojo they had in past elections to mobilise their young supporters effectively.

According to a 2016 World Bank Report, Kenya has the highest unemployment rate among East African nations, with nearly one in every five Kenyans without a job. A majority of those without jobs are young people. At the sharp end of nearly every socio-economic problem in Kenya, you will find a young person.

During past presidential campaigns, Kenyan youth formed the willing crowd that cheered both sides as ethnic tropes were bandied about. They shouted the loudest at campaign rallies.

But this time around, the mask that both political sides wear during campaign season seems to be slipping off.

There are a couple of reasons for this.

Uhuru Kenyatta’s base is made of smallholder farmers, who expected heavy investments in agriculture in return for their overwhelming support of Kenyatta’s candidature in 2013. Yet as late as July this year, you hear their murmurs of discontent about coffee and milk prices in central Kenya. Many of these farmers are young people, either raised on farms or forced to work on them because of a lack of options. Kenyatta’s promises aren’t sticking quite as well with them as they used to.

In Odinga’s base, his claim that he hasn’t really had a chance to lead and change the lives of his people just isn’t sticking either. His five-year term as prime minister, to the man on the street, was opportunity enough for Odinga to change the fortunes of his constituency. Also, theft of resources by governors in his stronghold regions, under Kenya’s now five-year-old devolved system of governance, has upset a lot of his voters. He is campaigning on a “drain-the-swamp” agenda, yet Odinga hasn’t checked the rapacity of some of the governors in his party who have been accused of theft. So the Kenyan youth is not entirely convinced about his potential to change the country for the better either.

In short, neither candidate has the mojo they had in past elections to mobilise their young supporters effectively. Odinga doesn’t represent the brand of change that he did in 2007, which energised the youth back then. Kenyatta doesn’t have the ICC cases hanging over him as he did in 2013, something that he (very cleverly) used to extract the sympathy of older voters, and the rebelliousness of younger voters against what was seen as foreign interference in Kenya’s local politics. But even this didn’t prove to be enough for young voters to feel enthusiastic about supporting him.

The Kenyan youth may be losing interest in national politics, but that is not the case with local politics – and both presidential candidates are partially responsible for this.

In 2010, Odinga as prime minister, and Kenyatta as deputy prime minister, both campaigned hard for the passing of a new constitution, which ushered in a devolved system of governance. Kenya was run from Nairobi in the past, but now it is run in 47 counties, each with the budget and the political structures to manage its own affairs.

The fact that politics is hyper-local now means that Kenyans have a reason to vote in local elections, in spite of their collective disappointment with the old-hat politics at the national level. Contests at the county level have all the passion that the national race seems to have lost, if not all the promise of change that young voters yearn for.

Twenty-four-year-old Simon’s ambition, if he does indeed become his ward’s representative, is to become the governor in his county one day, not the president. It is because he sees very clearly that county-level politics has a real impact on his life that national politics never really did. Roads now exist where there were none, there’s more money at the local level and crucially for people such as Simon, the barriers to entry for local politics are far lower than those for national politics.

That’s why presidential candidates, whose meddling in local affairs to marshal support for themselves was once a given, are now facing open resistance to the idea of imposing their chosen candidates on the public.

Fundamentally, the differences between Uhuru Kenyatta and Raila Odinga are so indistinguishable for young people that they may decide not to vote for either of them. The challenge for either political side is to energise young voters who see in this election a future that looks just like their past – one in which they were forgotten. 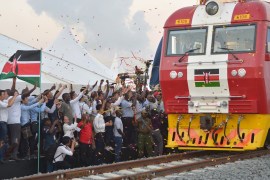 The country’s biggest infrastructure project since its independence is under fire by some for its high costs. 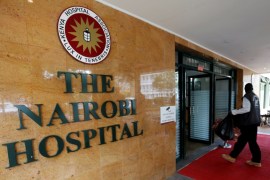 Thousands of physicians call off 100-day strike over pay and working conditions after dozens died without care.