Sport is romanticised as a safe haven from the troubles and turbulence of society. But, in fact, it is a mirror of what is unfolding beyond the pitch, and in the case of American sport, beyond the lines of play.

This is particularly true for the National Football League (NFL), as illustrated by the controversy surrounding Colin Kaepernick, the quarterback effectively blackballed from the league for protesting the national anthem during the 2016 regular season. In August of last year, Kaepernick articulated the basis of his protest, stating: “I am not going to stand up to show pride in a flag for a country that oppresses black people and people of colour. To me, this is bigger than football and it would be selfish on my part to look the other way.”

For social justice advocates, Kaepernick became a hero, following in the footsteps of Muhammad Ali, John Carlos, and other athletes that seized on the field of play, and their fame, to shine light on the injustices endured by their people. Yet, for the NFL and its fraternity of owners, Kaepernick was a pariah that not only threatened the NFL brand, but the very lifeline of modern professional sports, and particularly leagues comprised of predominantly black and brown athletes. Those have been reducing the athlete into a docile beast for mass entertainment, and punishing those who dare to step out as critical citizens.

By championing the Black Lives Matter movement and channelling his celebrity to challenge racial injustice, Kaepernick pierced the myth that sport is a field divorced from the bleak realities gripping Black men and women in America. And by doing so, he exposed that the very racism that inspired his protest thrives in the league that blackballs him today.

Stay in your lane

Kaepernick electrified fans during his very first season, posing for his signature flex after every score and leading his San Francisco 49ers all the way to the Super Bowl in 2013, the NFL’s championship game. His play on the field spoke volumes, and the NFL was quick to get behind a future star that played quarterback for one of its most storied, bankable franchises. And it did, featuring the 49ers on prime time television, and marketing Kaepernick as one of its emerging, must-see attractions.

A young black man at the centre of one of the nation’s biggest media markets, Kaepernick – with his physical prowess and play – meant great profit for the NFL. And fans flocked to see him dart past defenders and effortlessly toss 50-yard touchdown passes. The “sky was the limit” for Kaepernick on the field, but just as importantly, he played his position beyond it. He initially steered clear from the political activism that would later define him as Colin Kaepernick the man, and not Colin Kaepernick the athlete.

But the NFL only wanted the athlete, not the critical citizen and young black man living in the very country that, only one year before he led his team to the pinnacle, witnessed the murder of Trayvon Martin and the birth of the Black Lives Matter movement. Although 70 percent of NFL players are black, league offices – led by authoritarian commissioner Roger Goodell – intimidated its athletes to stay hushed, on the sidelines of a nationwide movement that affected them, their families, and the very communities they hailed from. In the NFL, Black lives mattered only when making tackles, scoring touchdowns, and pushing the league brand.

Kaepernick’s political consciousness burst to the fore in 2016, and his season-long protest challenged the institution that kept the NFL’s majority black roster of players docile, frightened, and in line. By kneeling during the national anthem, Kaepernick simultaneously took a stance against the systemic racism plaguing people of colour in the US, and the structural reduction of the black athlete into a compliant commodity.

For the NFL, Kaepernick is a threat because of what he stands for as an individual, but even more so, for his potential to inspire others to follow his course.

But Kaepernick’s activism was far more than just protest on the field. He walked the walk off of it. Kaepernick held free “know your rights“ camps for youth, donated $1 million of his own money to non-profits working against police violence, and marshalled his resources and attention to help with the famine in Somalia.

Yet, for the NFL, Kaepernick’s condemnation of white supremacy and the racial violence of the law enforcement, which drove his protest, crossed the line.

However, the league did not categorically restrict all political speech. The majority of its owners, and the face of the league, Tom Brady, are open Trump supporters. But rather, the league discriminated against the sort of speech that called the dehumanisation of black people into question and demanded justice for Philando Castile, Sandra Bland, and the scores of black men and women slain on the streets of America.

Shut up and play

For a league so closely wed to uncritical American patriotism and keen on appeasing its 83 percent white fan-base, “shut up and play” could very well be the unofficial tagline for the NFL. Especially for politically conscious athletes of colour, like Kaepernick, whose stance has moved fans to call him everything from the N-word to a “Muslim terrorist“.

However, efforts to intimidate Kaepernick into silence have not only come from the stands and on social media, but from NFL leadership by way of a de facto blackball. Although Kaepernick led his team to the Super Bowl and had a productive season in 2016, boasting statistics that best several starting quarterbacks in the league, he has been passed over for journeymen and marginal backups. League executives and coaches, including Seattle Seahawks coach Pete Carroll, have called Kaepernick “a starter in this league”, indicating that the man’s afro and unapologetic Blackness, and not his abilities, are why an NFL franchise won’t sign him.

For the NFL, Kaepernick is a threat because of what he stands for as an individual, but even more so, for his potential to inspire others to follow his course. To prevent this, NFL brass and gatekeepers have dangled Kaepernick as a cautionary tale, used to chill the speech of other athletes and warn them of the consequences if they choose to speak out on controversial matters. Therefore, blackballing Kaepernick had this intended collateral effect, particularly in a league whose owners helped bundle over $107 million for Donald Trump‘s presidential inauguration.

Ray Lewis, one of the NFL’s most iconic players with influence in the Baltimore Ravens’ front office, a team that contemplated signing Kaepernick (at time of this article’s publication), towed the NFL line, stating, “What you do off the field, don’t let too many people know, because they gonna judge you anyway, no matter what you do, no matter if it’s good or bad”.

In other words, shut up and play, stay silent and subservient, and remain within the lines drawn by your league masters. In response to Lewis, and the league he spoke on behalf of on August 1, Kaepernick tweeted, “Ignorance allied with power, is the most ferocious enemy justice can have.” He stood up to his blackballing and chose freedom over a league that covets his body but castigates his mind. 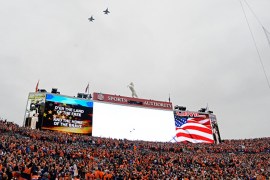 The vilification of Muslims in world sport

For the millions of Muslims who love US sport, knowing who to cheer for isn’t easy. 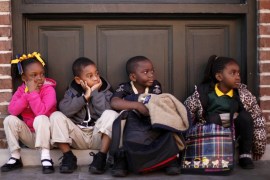 Why we still need Black History Month in the US

In an ideal world, Black History Month wouldn’t be necessary. But we don’t live in one.