The goal of this tour is to discuss the next steps to “restart Israeli-Palestinian peace talks”, according to a White House official. While Kushner might eventually be able to arrange some meetings between Palestinian and Israeli leadership, no peace deal will be achieved under this administration and Trump “will [not] get it done,” as he previously promised.

The most important shortcoming of Trump administration’s efforts to achieve peace is that it does not have a clear vision for that peace. He lacks even the most basic understanding of what he really wants to achieve, a two-state, one-state, or no-state solution. “I’m looking at two-state and one-state and I like the one that both parties like. I’m very happy with the one that both parties like,” he once stated. As 24-years of failed American mediation in this conflict shows there is nothing that “both parties” like. Benjamin Netanyahu likes only one thing: keep building Israeli settlements in the occupied West Bank and obstructing the establishment of a Palestinian state at any cost, as he promised during his 2015 election campaign.

Though it failed to achieve it, the Obama administration had a clear position on the two-state solution and worked hard towards that goal. This administration has failed to take a position. Trump’s lack of vision has confused the Palestinian side, which still lacks a strategy to deal with this administration. Just before the arrival of the Kushner delegation, a spokesman for Mahmoud Abbas stated that the Palestinian Authority President “wants clarity” on the American position on the two-state solution. This confusion is definitely going to reflect itself on the talks that Kushner will be having with the Palestinian leadership soon.

Another obstacle in front of this administration's success is the lead mediator Mr Kushner himself. He is young and has no experience in the world politics as most of his career was in real estate development.

The second major reason why Kushner is set to fail is the fact that Trump administration is in disarray – or in Abbas’ words “his entire administration is in chaos”. Given the frequent resignations and high turnover in his administration, it is questionable whether Trump even has time to think about the Palestinian-Israeli peace process. It is unclear how he would sustain efforts to achieve a “peace deal” with this much instability in his own office.

Also, just like the previous US administration that failed to achieve a peace deal, this administration uses a “facilitation strategy” rather than an “interactive strategy” in mediation. Facilitation lacks the necessary power and assertiveness to achieve a deal, while interactive efforts can successfully respond to any development that may take place the mediation process. Facilitation can only work when both parties are willing and eager to achieve a deal, but that is definitely not the case here. One major reason behind the failure of the Obama administration to achieve a deal was its refusal to exert any pressure on the intransigent Israeli government, which always opted for expanding the scope of its settlements rather than achieving peace. Trump administration is likely to repeat the same mistake. To be sure, just before the Kushner team’s arrival in the Middle East, Netanyahu government announced that it allocated $1.5m to build a fence around Beit El settlement.

Another obstacle in front of this administration’s success is the lead mediator Mr Kushner himself. He is young and has no experience in the world politics as most of his career was in real estate development. It is not easy to jump from construction work to mediating one of the most complicated conflicts in the world. Even more worrisome is Kushner’s pro-Israel bias, which is not a secret to anyone. This blatant bias contradicts the very basic principles of mediation: neutrality and impartiality. With this kind of credentials, success becomes more elusive for Mr Kushner.

In order for Trump to succeed, he has to make it incredibly clear that he is committed to the two-state solution. He needs to firmly reject Israel’s settlement expansions in the West Bank. Toothless mediation is not going to work for this type of conflict. He needs to apply pressure, especially on settlements, as they have been the primary reason behind the failure of previous US mediation efforts.

Palestinians should not waste their time by expecting concrete results from this administration. This is not to suggest that they should boycott Trump’s envoys and not talk to them. They should work with this delegation as if they are really going to make a peace deal, but they should also develop national strategies to end the occupation as if there is no American intervention in the first place. The status quo is in favour of Israel’s colonial project and every day that passes with Israeli occupation in place is making it a little bit harder to build a viable Palestinian state in the future.

Ibrahim Fraihat is Associate Professor of International Conflict Resolution at the Doha Institute for Graduate Studies and Afifiliate Scholar at Georgetown University in Qatar. He is the author of Unfinished Revolutions (Yale University Press, 2016).  Follow him on Twitter: @i_fraihat 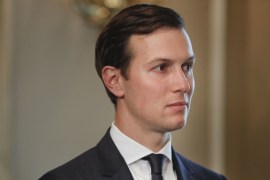 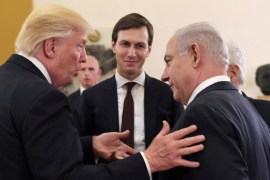 Is a resolution of the GCC crisis imminent?

The ‘deal of the century’ as a deliberate deception

Why is Netanyahu so desperate for a ceasefire with Hamas?

What is behind Jared Kushner’s latest Middle East tour?