Although White House intrigues and infighting are nothing new, the Trump White House has taken these brawls to a new level. After several weeks of very public feuds, Trump on August 18, under the influence of his new chief of staff, John Kelly, fired the White House chief strategist, Steve Bannon, who was rumoured to have been behind right-wing attacks on National Security Adviser HR McMaster.

Trump’s advisers are a mix of “alt-right” ideologues who believe that Trump should completely shake up Washington and pursue an “America-centered” policy, and pragmatists who believe the United States should lead the international community and maintain traditional alliances.

The former was represented by Bannon, who was executive chairman of the alt-right Breitbart News organisation, along with some allies that were put on the staff of the National Security Council by Trump’s discredited former National Security Adviser Michael Flynn. McMaster, Defense Secretary James Mattis, Secretary of State Rex Tillerson, and now John Kelly, the new White House chief of staff, represent the latter.

McMaster has been the subject of vitriolic attacks by Breitbart News and other right-wing media because he has kept on some staffers from the Obama administration and fired other staffers that his predecessor, Flynn, had brought on. McMaster also favoured allowing former Obama National Security Adviser Susan Rice to maintain her security clearance as a courtesy. Another episode that earned the wrath of the right wing was that McMaster joined Mattis and Tillerson in recommending to Trump to certify to Congress that Iran was upholding the nuclear deal.

In the ideological mishmash of the right wing in America, McMaster has been depicted as a pawn of a worldwide “Jewish conspiracy” because of alleged connections to George Soros, a billionaire who supports liberal causes and is of Jewish background, as well as a critic of a strong US-Israeli relationship because McMaster reportedly supports the nuclear deal with Iran and has disagreed on occasion with Trump’s son-in-law, Jared Kushner, over Israeli-Palestinian issues.

Although some reports have suggested that Bannon was sacked by Trump because he gave an unauthorised interview where he seemed to disagree with Trump's hawkish stance on North Korea, Trump may have wanted to sack Bannon as a way to deflect US public anger over his own comments about the Charlottesville incident

McMaster’s relationship with Trump has sometimes been problematic because of disagreements over Afghanistan and Iran. On the former, McMaster has been reflecting the views of the US military that sees a need for more US troops in Afghanistan to continue its training mission of the Afghan army and prevent the Taliban from taking any more territory in the country. Trump, on the other hand, has questioned the efficacy of this Afghanistan strategy.

On Iran, McMaster was simply reflecting the reality that Iran was implementing the nuclear deal and, for the US to pull out of it, would strain ties with European allies. Despite these differences, Trump gave McMaster a public show of support on August 4 by stating, in response to right-wing attacks, that McMaster was “very pro-Israel”.

The recent advent of John Kelly to the White House chief of staff position has been a plus for McMaster, as the two are friends from their days in uniform (Kelly was a Marine Corps general and McMaster is still an Army general). Both also share an antipathy to Bannon.

The influence of Charlottesville

The recent violence in Charlottesville, Virginia, led by a group of white supremacists, including neo-Nazis, which resulted in widespread revulsion in the US, also may have boosted McMaster’s standing vis-a-vis Bannon. Although Bannon was not linked directly to this incident and has denied that the alt-right is inherently racist or anti-Semitic, there have been enough articles in Breitbart (during and after Bannon’s stewardship there) that tend to follow the white supremacist agenda to make a connection.

Although some reports have suggested that Bannon was sacked by Trump because he gave an unauthorised interview where he seemed to disagree with Trump’s hawkish stance on North Korea, Trump may have wanted to sack Bannon as a way to deflect US public anger over his own comments about the Charlottesville incident in which he seemed to put anti-fascists on the same level as neo-Nazis and claimed there were “some good people” in a neo-Nazi led march the night before the violence broke out in that city.

In terms of the administration’s foreign and security policy, this essentially means that the pragmatists now have the upper hand over the ideologues. Although Trump is the ultimate decision-maker and can be erratic at times, the advice he will be receiving will come more and more from people with significant experience in foreign and security matters, like McMaster.

As for the Middle East, this means that Trump will likely maintain commitments to allies and will not retreat into a kind of “fortress America”. On the Israeli-Palestinian issue, Trump will still listen to Kushner because of family ties, but if Kushner decides to throw in the towel, McMaster and his NSC staff might reclaim that portfolio.

Gregory Aftandilian is a lecturer at the Pardee School of Global Studies at Boston University and is a former US State Department Middle East analyst. 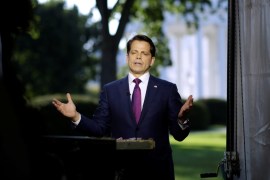 Removal after just 11 days in the role comes hours after President Trump’s new chief of staff John Kelly is sworn in. 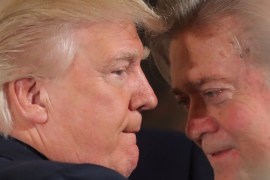 Trump’s decision to oust his chief strategist Bannon is significant, but it doesn’t mean populism left the White House.