On Friday evening in Charlottesville, a coordinated group of white supremacists marched through the University of Virginia campus holding torches, shouting “white lives matter”, and setting the stage for the Unite the Right rally on Saturday. The rally, which protested against the removal of Confederate monuments and sculptures within the city, galvanised white supremacists from various groups, most notably Ku Klux Klan sympathisers, Neo-Nazis, and leaders of the so-called “alt-right” movement.

With their faces unmasked and identities uncloaked, the protesters raised their arms and chanted “blood and soil”, in the Nazi tradition, not fearing their association with the hate group and its ideology. The rally highlighted not only the growing normalisation of the white supremacist movement in the United States, but also its intimate synergy with the administrative and institutional leadership in Washington, DC.

US President Donald Trump, his rise and subsequent regime, have emboldened white supremacists of every stripe in America. Of course, championing such an ideology in modern times is neither new nor unprecedented. In fact, both an Ivy League law school professor and a member of congress have done so recently.

What is new is the brazen manner in which the protesters are expressing their support for white supremacist ideology, not being afraid to show their faces, eschewing coded  language or dog-whistles to describe their beliefs.   They appear seemingly  unconcerned about being stigmatised as racists or Neo-Nazis and feel that they are part of the mainstream political landscape in the US once again.

The presumption of innocence and the freedom from collective guilt are, arguably, the two most potent hallmarks of white privilege. This privilege was on full display in Charlottesville, as white supremacists brandishing torches as weapons and hurling racist slurs showed their names and faces, seemingly not fearing any repercussions. Rather, they were unabashed about their affiliations with hate groups and ready to reclaim “their country” from African Americans and immigrants, Muslims and whoever else stood in their way.

READ MORE: Charlottesville attack – what, where, who?

The expected crowd of 6,000 joining them on Saturday extinguished fears of stigma or punitive action. Even more forceful was the tacit endorsement from within the Trump Administration. White supremacy is well-represented in Washington, DC, today and well-embedded in the structures that precede the current administration.

It is easy to condemn Neo-Nazi protesters, but difficult to enact policies that dismantle and divert from white supremacist structures and policy.

After all, the white supremacists marching in Charlottesville are the conspicuous face of a broader and stratified movement, which includes statesmen, CEOs, and other prominent faces hidden from our gaze but well-positioned in mainstream society.

Therefore, white supremacists are hardly ideological deviants or fringe segments of society nostalgic for American apartheid. While mainstream political discourse has framed them as such for decades, the movement in Charlottesville showed that the visible foot soldiers on the ground are intimately connected to state power and policies seeking to abolish affirmative action, suppress the vote of communities of colour, enforce Muslim bans, and limit immigration to English speakers.

Unfortunately, our historic and present-day treatment of white supremacy gives individuals like the protesters in Charlottesville little reason to be ashamed or fear stigmatisation.  As a country, the US has not gone far enough to disrupt or dismember white supremacy as a prominent ideology.  Instead, support for white supremacist ideology within the US has historically been permitted to fester nearly unabated.

Despite this history, and even Gen Robert E Lee’s pleas for the divisive flag to be put to rest, the Confederate flag is allowed to fly freely, with some form of it even embedded in some state flags.

In contrast, in Germany after the demise of the Third Reich in World War II, the Nazi flags, insignia and symbols were banned.   It is now a criminal offence in Germany to display Nazi symbols.

The historic embrace of the Confederate flag reflects our collective failure to stamp out white supremacy as an ideology and, in some ways, contributes to what we are seeing in Charlottesville today.  It is easy to condemn Neo-Nazi protesters, but difficult to enact policies that dismantle and divert from white supremacist structures and policy.

The euphemism “alt-right” started being used instead of  “white-supremacist,” “racist,” or “Neo-Nazi”.  The term was so lacking in proper context and confusing that the Associated Press eventually issued guidelines governing its use.

Further, humanising profiles marvelling   at how well-dressed and well-spoken white supremacists like Richard Spencer are grace the pages of   mainstream popular press outlets.  Instead of branding them as pariahs, or elements that spur racist violence, the mainstream has normalised the new champions of white supremacy.

A great American myth holds that racism erodes as time passes. However, reality consistently reveals that racism fluidly adapts to prevailing political norms, demystifying the idea that it is perpetually diminishing and declining. Events in Charlottesville, and the swelling movement of explicit and unabashed white supremacy that it represents, illustrate that modern racism is mutating back to its original out-in-the-open form.

Erika Wilson is the Reef C Ivey II Term Associate Professor of Law at the University of North Carolina School of Law. 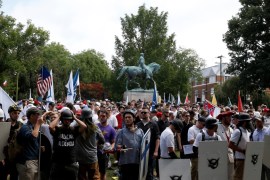 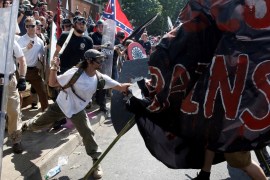