Tajikistan’s President Emomali Rahmon has ordered a special commission to oversee an “appropriate” dress code for both men and women. This decision followed his Mother’s Day speech in March in which criticised women for wearing “foreign” black clothing.

The president was referring to the black Islamic dress that has become increasingly popular in Tajikistan despite his previous condemnations of it. His first criticism was voiced in 2015 after which a campaign against the hijab began with heads of institutions demanding that their employees not appear at work wearing one.

Tajikistan, a former Soviet republic with a population of about 8 million, is a predominantly Muslim nation. Rahmon, himself a Muslim by upbringing, is secular and has tried to curtail religious freedoms by linking religiosity to extremism.

The measure should, therefore, be seen in the context of the president’s attempts at tightening the noose on the opposition Islamic Renaissance Party of Tajikistan (IRPT), which he has almost completely dismantled over the past five years. President Rahmon, who has been in power since 1992, has grown increasingly authoritarian over the years, limiting private life and political expression in the Central Asian republic.

“Wearing the hijab and blindly copying a culture that is foreign to us is not the sign of having high moral and ethical standards for women,” the president said back in 2015. The hijab is a headscarf worn by many Muslim women who feel it is part of their religion.

The new commission is tasked with combating this “alien” culture. It will design clothes “taking into consideration Tajik traditions” and “modern” life, the Culture Minister Shamsuddin Omurbekzoda has said. The ministry is preparing samples of national women’s clothing, “in order to avoid wearing foreign clothes“, he said.

“No one knows the people who hide behind these covers,” said the minister, calling women in black religious dress “imitators of alien fashion”.

The Tajik president’s nervous disposition toward clothing is the result of increasing religiosity among the general population after the breakup of the Soviet Union. New mosques have been built attracting more people for prayer, more Islamic study groups have appeared and more women and men have donned Islamic-style dress. At the same time, Islamist armed groups have been active in the border areas of Tajikistan and Afghanistan.

In 2015, Russia even suggesting sending Russian border guards to take control of Tajikistan’s border with Afghanistan to fend off “militants and terrorists”.

The political message of a dress code is quite clear. It is to control an important element of people's private lives and impose a set of centrally designed uniforms on the masses.

But research by the British think-tank, Chatham House, into Central Asian Muslim radicalisation has shown that “there is little or no evidence of significant levels of Islamic extremism and political violence in Central Asia”. If there is, it is isolated, localised and inhibited by secularisation. The paper argues that claims about general Muslim radicalisation in the region constitute a myth not supported by evidence.

“The myth acts as a legitimating device for the militant secularism of weak regimes,” the paper says. And indeed the repressive measures taken by Tajikistan’s president demonstrate that his secularism could be more dangerous than violent extremism.

The terms used in official speeches by the president and the culture minister are, moreover, contradictory, controversial and at times outright insulting.

To start with, it is unclear how the clothes could at once be in line with Tajik “traditions” and yet “modern”. In the Soviet era, tradition referred mainly to Islam. It was held by most political scientists that tradition diminished as modernisation and secularisation gradually spread.

It is also not clear what is meant by “traditional” clothes. With over 90 percent of the population being Muslim, traditions have always been predominantly influenced by Islamic culture in any case. Even the mighty Soviet machinery of control and secularisation did not deter the people from carrying on their Islamic traditions.

In his speech, the culture minister clarifies that what he means by “alien” is “Arab”. That doesn’t help either, since it is not clear how he makes a distinction between Islamic culture and Arab culture. Then he uses another ironic excuse saying the Islamic hijab is not suited to the hot climate of Tajikistan and it is, therefore, “unhygienic”.

The political message of a dress code, however, is quite clear. It is to control an important element of people’s private lives and impose a set of centrally designed uniforms on the masses. We’ve seen it in many other states, new and old, Islamic and non-Islamic, but always authoritarian.

“The Almighty is known by the mind and worshipped in his heart, not by the garment, satr, hijab, turban and beard,” the Tajik president has said.

That may be plausible to some, but then it could be regarded as insulting to those who choose the Islamic style. And the insults are at times fabricated to justify the forced secularisation. Eurasianet reported that Tajik official TV aired a programme in which women wearing the hijab were portrayed as sex workers, saying they earned more money by wearing the full Islamic cover.

In authoritarian states, individual freedoms are subordinate to the centralised power, which is maintained by political repression and the exclusion of potential challengers.

The aim in Tajikistan is clearly the exclusion of IRPT, whose activity has been banned and whose members are all in prison or in exile. The 1997 peace deal between President Rahmon and IRPT promised the opposition 30 percent of ministerial posts. This year, for the first time, the party has no representation in parliament.

It could be argued that IRPT has posed no security threat. True that its members have gone against some clauses of the peace agreement by making political statements in mosques and encouraging people to guard their Islamic traditions, but that’s a far cry from actually posing a threat or having a connection to militant groups.

And on the other end of the scale, President Rahmon has used all state institutions to turn his tenure from five years to life and turn his presidency into a hereditary monarchy in which his son is the next in line.

His wish to secularise Tajikistan will, however, have little or no impact unless the political process connects with the public. After 25 years in power, he has failed to create any real change in the hearts and minds of the people or in the fabric of the society. 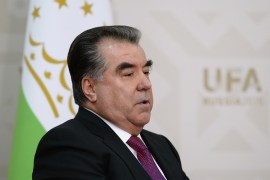 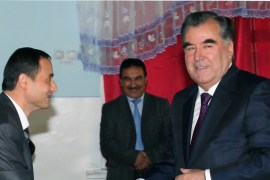